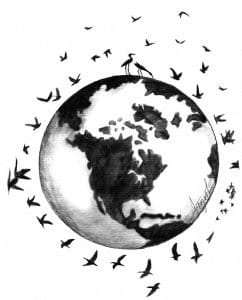 Mornings are quiet now. Gone is the loud chorus of bird song outside my window that I awoke to in spring and summer. While we brave the cold, snow, and bitter winds of winter by donning extra layers or throwing another log on the fire, most of our summer birds have departed for the warmer temperatures and abundant food of more southern latitudes.

The robin that pulled earthworms from our lawn in summer may now be in South Carolina, part of a nomadic flock of over a hundred robins, hopping about in the branches of holly trees, gorging on berries. Robins adjust their diet in winter from worms and insects to mostly fruit. Their social behavior also changes. Whereas they defend territories from other robins during breeding season, during migration and winter robins become gregarious. Living in a flock provides more eyes to detect both predators and food sources.

Although the majority of robins migrate, in recent decades some have stayed within 60 miles of their breeding territories year-round. However, most of the robins present in the nortrern Northeast in winter likely nested in Canada last spring.

Like robins, hermit thrushes switch from feeding mainly on invertebrates during breeding season to a winter diet heavy in fruit. Unlike robins, some thrushes are territorial on their wintering grounds and return to the same location year after year. The hermit thrush that crooned his sweet melody in the woods behind my house last summer may be spending the winter in a riverside forest in Florida.

Some of my backyard birds winter much further south. The yellow warbler that nested in the shrub willows along the stream across the road may be flitting about the treetops of a neotropical forest in Columbia, hunting caterpillars. The Baltimore orioles that raised their young in my yard ay be in Costa Rica, sipping nectar from flowering trees in a shade-grown coffee plantation.

The birds’ journey to these balmy locales is dangerous. Many perish in storms, are preyed on by housecats, or collide with skyscrapers after being confused by artificial lights. Some die of starvation, especially as their usual stopover sites are developed. Birds also expend a considerable amount of energy during migration. One yellow warbler caught in a mist net by Cornell researchers in spring had been banded two months earlier in Colombia, 2,300 miles away, and had lost 20 percent of its body mass during migration.

Since the trip is so arduous, why do birds travel back and forth instead of staying in the South year-round? For many species, the benefits of migration outweigh the costs. While the tropics have insects and fruit year-round, there is stiff competition from resident birds for food and a high density of predators. In spring and summer, the North offers a bonanza of food and breeding opportunities.

According to the Cornell Lab of Ornithology, a leading theory is that bird migration evolved by an expansion of small annual movements as birds searched for food and better breeding habitat. This gradually increased the distance between summer and wintering grounds. Birds whose travel habits gave them a better chance to survive and reproduce passed migratory behavior on to their offspring. The Earth’s recurring cycles of climate change and glaciation likely also contributed: with each glacial advance northern birds retreated to more southerly breeding locations, and when the ice receded birds travelled north to take advantage of vacant habitat.

A 2014 study led by Ben Winger of the University of Michigan which analyzed the evolutionary trees of 800 species of songbirds seems to confirm this theory. His team found that most often, long-distance migration evolved by northern breeding birds gradually shifting their wintering ranges southwards over generations (as opposed to southern birds moving north). This research also revealed that many tropical resident birds are descended from migratory ancestors who lost their migratory traits.

Changes to wintering grounds – due to habitat loss and climate change – pose the greatest challenge to many of our summer birds. A 2017 study by Frank La Sorte of Cornell found that 21 species of eastern North American forest songbirds, such as warblers and vireos, spend 60 percent of the year in Central America.

During the northern winter, I’ll have to content myself with watching our hardy, year-round avian residents at my feeder, while I look forward to the safe return of thrushes, orioles, and other spring songsters.