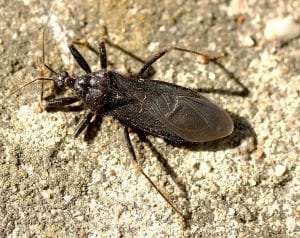 If you were to confide in a friend that you’ve seen dust-bunnies under the bed come to life, and that you think masked hunters have been stalking you at night inside your house, well, hopefully that’s a REAL good friend. Of course they’d feel a lot better once you explained that masked hunters are a type of assassin bug belonging to the order Hemiptera (true bugs).

Native to Europe and Africa, masked hunters are now widespread throughout North America. These fierce predators of insects and other arthropods get their name from a curious habit of coating, or masking, themselves with detritus and dust as a form of camouflage. Mature adults are shiny, black beetle-like insects measuring about three-quarters of an inch long. During their long “childhood,” though, masked hunters are neither dark nor shiny.

During their several immature or nymph life stages, their bodies exude a sticky substance, and young masked hunters glue fibers from their surroundings onto themselves – turns out that it’s not just human children who like to play with paste. In addition, masked hunters have barbed hairs on their legs, which further aid them aid in trapping dust. They do a good camo job, and can look for all the world like animated lint-blobs.

Masked hunters are seldom found indoors, and when they are it’s most often only in small numbers. There are rare exceptions during sporadic “boom” years when their population spikes, and at such times more of them may be seen around the house. The good news is that even though they’re dusty, they’ll clean house for you, scouring the place for unwanted irritants. Like most assassin bugs, masked hunters will eat pests such as millipedes and bed bugs.

That is the good news, which is an unsettling phrase, as it suggests bad news will follow. And there are a couple of down sides to having these guys afoot in your abode. The first is that masked hunters possess a formidable weapon, a piercing mouthpart called a rostrum. They use this sharp hypodermic needle of a mouth to impale their prey and inject a toxin to both paralyze it and liquefy its insides. Even prey larger than they are taken down.

Although they’re not aggressive, masked hunters do sometimes bite people when handled, either defensively, or inadvertently. They’re most active at night, and although this is rare, they’ve been known to bite people who groggily brushed away a bug that landed on them as they slept. The bite causes painful swelling that can last up to a week. Such an attack may not be discovered until morning, and since the culprit has fled, the injury may be labeled a spider bite.

The other down side, if you can call it that, is corollary to the fact masked hunters really like to eat bed bugs. If you have lots of these dust bunnies running around underfoot, you might also have their favorite – and everyone’s least favorite – bedfellows as well. When masked hunters appear in large numbers inside, you should look for signs of bed bugs. But if you see just one or two hunters, chalk it up as a curiosity that more often than not is an asset.

If indeed you do ever find yourself talking to a friend about these fascinating bugs, keep your voice down. Not everyone will realize that your allegation of tiny masked hunters lurking under your bed is fact-based, rather than a symptom of a break with reality.