These newcomers were mostly Catholic.

At the beginning of the century, Catholics numbered only about 70,000, but by 1830 there were 74,000 in New England alone, though still only a little more than a third of them Irish.

In 1840, the Catholic Church claimed 660,000 members and ten years later almost three times that number, mostly Irish. These new immigrants strained municipal governments and brought criticism from native born Americans against what they perceived as a flood of Irish paupers and a corresponding rise of criminality.

Where once American Patriots had denounced the restriction of immigrants to America in the Declaration of Independence, policies in Europe to foster the emigration of paupers were seen not only as a threat to American prosperity, but a threat of a Papal take-over. If Europe was sending it cast-offs, an increasingly organized nativist resistance to Irish immigrants argued, it was all the worse that they were paupers, criminals, and Catholics under the control of a foreign Papacy.

Anti-Irish sentiment was widespread and included men from all levels of society. “Most of them are paupers, strangers, sojourners, loafers, and other cattle, who contribute not one cent to the maintenance of the Government, and are not found save on days of the election, and never afterwards,” State Senator Erastus Root declared of the Irish. “They swear falsely with perfect impunity as respects punishment in this world, and, according to whose faith, perhaps the price of a day’s labor gives them absolute security in the next.”

First and foremost it was the Irish Catholic’s faith itself that made them anathema to Protestants already enjoying status in America’s unofficial state religion. Until well into the 20th century, American Protestants found Catholics obnoxious to their beliefs, and incompatible with their ideas of American liberty and individualism. In this way nativism against Irish immigrants wasn’t just a battle for the souls of Americans, it was for the soul of America itself. Nativism had been going on for some time at a simmer, but began to boil in the 1830s.

From the first settlement of Europeans New England Puritans and Southern Anglicans shared a hatred and fear of Rome. Every Colony except Rhode Island had laws that discriminated against Catholics.  The great American Calvinist Johnathan Edwards feared Canadian Catholics would bring New England under the sway of Popery. At Harvard, Jonathan Mayhew claimed Catholics were plotting to strip away the liberties of British subjects. Before the American Revolution “Break the Pope’s Neck” was a popular game in New England and school books included grotesque illustrations of the Pope; burning effigies of the Pope was a regular occurrence.

Anti-Catholic propaganda circulated widely and publicly.  The Quebec Act of 1774 which extended tolerance to Catholics in Quebec was inflamed into a conspiracy to establish Popish power in the colonies. Effigies of the Pope were annually carried to bonfires in New England towns, although attitudes shifted to some extent when Catholic France joined the cause of the American Revolution. In their constitutions of the 1770s however, seven of the thirteen former colonies – including New Jersey, New York, Connecticut, and Massachusetts – restricted Catholics from office outright, or, as with New York, required all naturalized immigrants to swear to abandon their allegiance to ecclesiastical power. Only gradually over the next 50 years were these restrictions on Catholics relaxed, with New York abandoning its objectionable oath during the Bucktail Constitutional Convention in 1821 which also extended the voting among white men. Still, popular sentiment against Catholics continued, and grew. 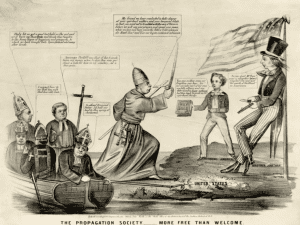 Many Americans saw Protestantism as the fountain source of their liberty and prosperity. They believed Catholics were under the control of a foreign Pope-King, hostile to the democratic American values protecting the country’s recently won independence.  They said they were uneducated and unqualified to vote, susceptible to manipulation by immoral politicians.

“The time has gone by in which your laws of naturalization might have been amended,” a Methodist preacher in Boston warned. “Your ballot box is now under the control of too much foreign influence and domestic ambition to allow of such an amendment as would affect the evil. Nothing remains for us but the more indirect operation of moral means.”

In the city of New York in in 1806, a crowd of Protestants attempted to disrupt the Christmas Eve Mass at St. Peter’s Church. After the news had spread the Irish stood guard outside the church on Christmas Day and street-fights ensued in which the Irish were routed by the mob and at least one man was killed. It’s said that only the arrival of Mayor DeWitt Clinton kept the mob from sacking Irish homes. The next spring Federalist put forth an “American ticket,” for the State Assembly and railed against the growing threat of foreign influence in politics, the first real strains of political nativism.

Contrary to popular perception as a friend to Irish immigrants, The Tammany Society in New York was at first strongly nativist. Its 1789 constitution had provided that only native born Americans could be Sachems, who led the organization. Roman Catholic immigrants, especially the Irish, were generally unwelcome. Catholics responded to this exclusion and hostility by forming their own associations.

After the Christmas Riot, the St. Patrick’s Society was founded in Albany, and in New York the Hibernian Provident Society was established. By 1809 Irish Catholics in the city of New York had enough power to run one of their own, Patrick McKay, unopposed by a Tammany candidate. A few years later Democratic Republicans in the city appealed to Irish voters to join forces against their common Federalist foes, and the Irish vote soon became a firmly established political power.  Still, the attitude of New York politicians was generally anti-foreign. In 1817 for example, Tammany denounced billiards as a game of foreigners and two years later recommended its members only buy goods made by Americans in America.

In the 1820s several intersecting threads were woven into a coat of nativism that was worn proudly by American Protestants. In 1826, the Massachusetts Legislature disestablished Protestantism in common schools buy requiring that school committees “shall never direct any school books to be purchased or used, in any of the schools under their superintendence, which are calculated to favor any particular religious sect or tenet.”

Protestant missionaries had a major role in establishing common schools across America and had expected their religion to be predominate. They worked continuously to have King James Bible Protestantism taught in every classroom.  Lyman Beecher worried about the existential threat that “the education of the rising generation, in which Catholics and infidels have got the start of us.”  In response, Catholics demanded that no religion be taught in common schools and organized private schools of their own and many simply kept their children home.

This is the first part of a three part series on Irish immigrants in the 1830s. You can read the second part here and the part three here.


Illustrations: Nativist cartoons from the 1850s.