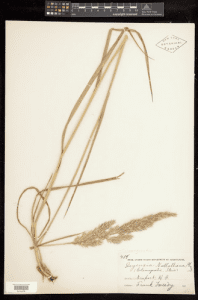 After discovery of the corner to Townships 42 and 41 on the Totten & Crossfield Line, Adirondack surveyor Frank Tweedy and crew encountered beautiful but challenging terrain in their march southeast to Big Moose Lake, where they camped in a high beaver meadow by Ledge Pond (now Jock Pond). Tweedy recorded the following:

“A short distance beyond we met a cliff 70 feet in height and deep ravine and ledges. Climbing very difficult. Completed our work on a slope to the S. Went forward to the cutting party and camped in a beaver meadow. Saw species of Calamagrostis canadensis 5.6 [ft] in Length.”

Common names for this tall grass species often found in wetlands on mountain summits are Canadian Reedgrass, Marsh Pinegrass, or Bluejoint. Tweedy’s love for botany is very evident in his Adirondack field books, with “plant-collecting” mentioned numerous times along with other activities like letter-writing and journal-keeping, and always on a Sunday. The Tweedy specimen of Calamagrostis canadensis shown here is now in the New York Botanical Garden (it was collected in Rhode Island in 1880).

Tweedy’s was collecting plants on Beaver Lake just after his graduation from college in 1875. He filed the brief report he submitted to The Bulletin of the Torrey Botanical Club:

“I collected that plant [Utricularia resupinate] in August, 1875, at the same locality…namely, the muddy shore of Beaver Lake, No. 4, Lewis Co., N. Y. During the past season [1879] I collected quite a number of the same plant on the shore of Big Moose Lake, Herkimer Co., N. Y., and at Twitchell Lake.”

This was one of many articles Tweedy contributed to the Torrey Botanical Club, one of the earliest such societies in the Americas and instrumental in the founding of the New York Botanical Garden. Interestingly, Tweedy was responding to a member of the Syracuse Botanical Club who regularly collected on Beaver Lake at “Fenton’s, No. 4,” and may have taught him how to properly report his specimens. There is some evidence the Tweedys had a summer residence in Lewis or St. Lawrence County near the main western access to the Adirondacks – the road from Lowville to Number Four and Stillwater, and the same route surveyed by Frank in 1876. Franks post-graduation stay at Fenton’s in 1875 was a full year before he began his Adirondack Survey job. 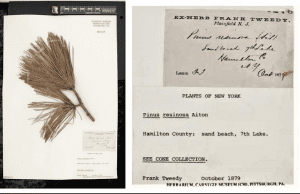 It appears that Tweedy had a reunion with a Union College buddy after finishing up his survey work on Seventh Lake and returning to his Twitchell Lake basecamp. On or about August 15th, he camped on an island on Seventh Lake where the Totten and Crossfield line ended at station 1419, just beyond the 26-mile marker from the Great Corner. In stormy weather he slogged his way back to Twitchell, recording:

“Aug 17, Sunday. Rain. Determined to make a start for Twitchell Lake. Crossed North Bay [of Big Moose Lake] in dugout & hacked over the trail. A party at Twitchell L helped us across. Reached log cabin at 2 PM & dryed ourselves thoroughly.”

Fellow Union College alumnus and friend Franklin Horatio Hough was just then finishing up a hunting and fishing tour nearby with his son and three friends, as reported in Lowville’s Journal & Republican (August 14, 1879). It is highly likely that Hough and his party were the ones who helped Tweedy and his crew across, celebrating together that evening and the next day the successful end to both their tours, though there are a number of Tweedy field books re-surveying or extending lines later in 1879.

Union College’s Concordiensis informed alumni two years after his graduation that Adirondack surveyor Frank Tweedy was “botanizing at Plainfield, N.J.” This brief comment revealed his avocation, with 6000+ plant specimens now housed in herbaria around the USA and Canada.

It may be the case that Tweedy picked up his passion for plants from the travel journals of Meriwether Lewis and William Clark, who were commissioned by Thomas Jefferson to collect plants of horticultural interest such as medicinal plants or those with economic value–for example, wheat or corn. Jefferson hoped some would end up in his garden in Philadelphia.

They also collected more than two hundred dried pressed plant specimens dignifying the richness and novelty of the flora of the Great Plains, Rocky Mountains, and Pacific Northwest. Meriwether Lewis described these plant collections in his journals (James Reveal).

Initially specimens were distributed among expert botanists for study, but now they reside in the Lewis and Clark Herbarium in Philadelphia. An herbarium contains dried pressed plant specimens with collection data, preserved for scientific study.

Frank Tweedy contributed his many plant specimens to multiple herbaria in the US and Canada. Though most are from his years in the Rocky Mountains, 33 were collected in the Adirondacks in locations like Beaver Lake and River, Big Moose, Twitchell, and Seventh Lakes. The illustrated specimen included here – Pinus resinosa Aiton – was collected on a sandy shore on Seventh Lake at the end of his Totten and Crossfield Tract survey. The enlargement details the technical information for this specimen which is housed in Pittsburgh’s Herbarium at the Carnegie Museum of Natural History. This species was first described by Scottish Botanist William Aiton, and is commonly known as Norway or Red Pine, the state tree of Minnesota.

Interestingly, the information with the Red Pine specimen includes “See Cone Collection,” indicating Tweedy knew to collect a cone as well as a branch. Because a cone cannot be pressed, it is placed in a different part of the herbarium, clearly linked to the pressed plant. Documenting trees was a part of Tweedy’s official survey duties. In July of 1979, he sampled many of the trees near the South Branch of the Beaver River, which he noted “was burnt over about 25 years ago.” Tweedy created tables for the various types, with the following comment:

“Commenced observations on the various forest trees intending, by measuring their height and diam. and counting their annual rings, to form a table giving their annual vertical and horizontal growth…The trees are cut down to measure their length and count the annual rings. Afterwards found that no significance received in their growth. Found trees (same species) of all heights & diameters – but yet of same age.”

A surveyor’s interest in trees also had to do with “reading” blazes to figure out when they were cut into a tree and how deep, as indicated by the tree rings in a cross section where a blaze was chopped. A series of later maps along the Totten & Crossfield Line done by Squire Snell – or more likely his son Sidney Snell – gave an inventory of the timber types by acre, with estimates of the number of cords available, probably funded by lumber interests in the mid to late 1890s.

In Tweedy’s autobiography, the end of a timeline of his career noted that he was “a botanist of distinction, [and] made a fine herbarium of the flora of Montana, which he presented to Yale University.” That collection includes 104 specimens and is now available for view online in Yales’ Herbarium at the Peabody Museum of Natural history in New Haven, CT. That was my first introduction to Tweedy’s avocation, until I was informed of the 6000+ Tweedy specimens by Hollis Marriott, Associate at the Rocky Mountain Herbarium, University of Wyoming, Laramie. She became acquainted with Tweedy through botanical work in Yellowstone National Park. Her interest in his pioneering floristic studies in Washington, Montana, and Wyoming has expanded into a biographical Wikipedia article about Tweedy, now in draft format. Check it out!

Tweedy’s specimens are now housed in many herbaria in the US and Canada, including the NY Botanical Garden, US National Herbarium, and Harvard University’s Herbaria. My search online spotted 35 plant species named in his honor, with ten of these still considered to be genuine names. Collecting in Tweedy’s day was very difficult, reporting a slow process, and many “new” species turned out to be previously collected and described. “The person who describes and publishes a new species cannot name it for himself. A plant may be named after the person who first collected it, or for a location, a plant feature, [or] much more” (Marriott, 2020). Indeed, Tweedy collected additional “novelties” (new species) not named for him. It is not clear how many, as these are more difficult to track down. 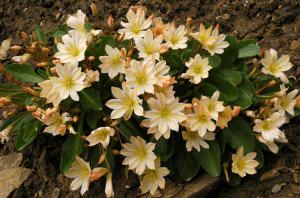 The plant illustrated here is perhaps Tweedy’s most notable find, a striking new species of bitterroot named Lewisiopsis tweedyi in his honor by one of the most important botanists of the 19 th Century, Asa Gray. The scientific name includes the genus (Lewisiopsis or sometimes Lewisia) and a specific epithet (tweedyi). Very popular in garden nurseries in the Northwest, this plant is marketed today as Tweedy’s Lewisia, Bitterroot, or Pussypaws.

Frank was working for the U.S Government as a railway surveyor on Mt Stuart in the Cascade Mountains near Wenatchee, WA when in 1882 he “discovered” this beauty. Bloom color ranges from stunning deep and pastel pinks with yellowish orange highlights.”

Ironically, the genus Lewisia, known to local Native Americans as Bitterroot, was first discovered in 1806 by Meriwether Lewis at Lolo Creek, Montana, the mountain range that became known as the Bitterroot Mountains. Its scientific name Lewisia rediviva indicates its ability to revive or come back to life from “dead” (dried) roots.

Lewisiopsis tweedyi was placed on the endangered list by the Committee on the Status of Endangered Wildlife in Canada because “it has undergone a decline of up to 30% in recent years, possibly due to plant collecting. The small population size [in British Columbia] and potential impact from changes in moisture regimes due to climate change place the species at on-going risk.”

Tweedy submitted regular reports to New York City’s Torrey Botanical Club, the oldest one in the Americas, on specimens he collected in Plainfield, N. J., Newport, R. I., and the Rocky Mountains. One of these reports titled “Notes on the Flora of Yellowstone Park,” echoed his Adirondack Field Books where the science of botany and love for natural beauty merged:

“A steep ascent of several hundred feet brought us upon an elevated plateau where a scene of great beauty burst upon our view. Spread out before us was a magnificent natural flower-garden, vivid scarlet and crimson Castilleia vied with purple lupines and carpet-like masses of snow-white phlox mingled with golden-yellow and orange flowers of every shade.”

While this three-page article lists a myriad of tree, plant, and grass species identified in scientific terms, Frank was clearly taken by the breathtaking beauty of Yellowstone, to include the peculiar floral species in its “treacherous hot spring bogs throughout the Park.” His Adirondack Field Books also sound like this.

While Tweedy sent many of his specimens to experts like Gray for verification, he was recognized as a plant expert in his own right for regions where he collected. For example, he published Flora of the Yellowstone National Park, detailing 605 species he collected in 1884 and 1885, with extensive background on Yellowstone’s topography, geology, and plant ecology and vegetation.

As descendant Kate Tweedy exclaimed upon hearing the scope and extent of her great great granduncle’s career and avocation, “Frank was indefatigable!”