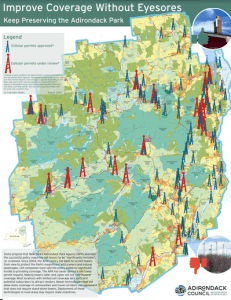 The Adirondack Park Agency (APA) has never denied a request for a cell tower permit.

The APA has modified several proposals to make them blend better with the landscape around the communities they serve. Since 2002, the APA has enforced what the Council says is a successful policy on tall structures and towers requiring that they be “substantially invisible” from public lands and waters outside of hamlets and villages.

“The Adirondack Park looks wilder than any other place because nature dominates the landscape,” Adirondack Council Executive Director William C. Janeway said in a statement sent to the press. “That is vital to the park’s continued tourism success. The APA’s towers policy has safeguarded the park’s wild character for 20 years now.

“Over those 20 years, cell companies have repeatedly confirmed that the APA’s tower policy has not prevented them from bringing service to the park,” Janeway said. “Companies have invested in all of the park’s largest communities, where they felt they would have sufficient customers. Yet the Park Agency is continually under pressure to ignore or weaken the policy.”

Some communities have gone far beyond the APA’s rules by requiring collocation on existing buildings, or concealment as part of an existing structure. For example, the ornate belfry on Elizabethtown Town Hall is really a cell tower, as is one of the chimneys on The Sagamore resort in Bolton Landing, on the shore of Lake George.

“Sadly, the proposed AT&T Tower in Indian Lake and Verizon Tower in Inlet violate the basic principle of the towers policy,” Janeway sais. “Both are very visible from public places outside of the hamlets they will be serving, including highways and the surface of several local lakes. Both would have open sky behind them that would actually attract attention to them.

“Both proposals need more work,” he said. “You can’t just dress these up as Frankenpines and pretend no one will notice them. They are visible from too many directions and too many places. And it is clear that”

In AT&T’s application for a new 83-foot-tall, free-standing tower in the Town of Indian Lake, the company admits the towers will be visible from three lakes and more than 4 miles of combined shoreline. But the company failed to provide visual simulations from the surfaces of Indian Lake, Adirondack Lake and Lake Abanakee.

The application says AT&T told the Park Agency that the company couldn’t get access to the lake at this time of year. The proposed towers have been a topic of discussion in the park for months, Janeway said.

Other areas of the application estimate that the tower would have visual impact on the natural character of the hillside and shoreline when viewed from 1,138 acres of Indian Lake’s surface and 46 acres of Lake Abanakee. But without visual simulations, the APA could only guess at the actual impact, Janeway explained.

The APA Tower Policy states that, “preferred methods to reduce visibility include: avoiding locating facilities on mountain tops and ridge lines; concealing any structure by careful siting, using a topographic or vegetative foreground or backdrop; minimizing structure height and bulk…” The proposed cell tower currently is sited on a hilltop and, according to the application, the “tower will be significantly skylit” on about 235 acres of lake and about 1.5 miles of shoreline on Lake Abanakee. Additional public viewing points where the tower is “significantly skylit” includes portions of NYS Route 28, Pelon Road, and Chamberlain Road.

Janeway said the Council urged the APA to exhaust all opportunities for collocation and examine locating communication infrastructure on existing structures in the Town of Indian Lake.

The 120-foot-tall Verizon tower proposed for the Town of Inlet, on the Fulton Chain Lakes, will be distinguishable from approximately 1,182 acres of the Forth Lake and about 11 acres of Fifth Lake, the application notes. From the Inlet Town Park/Town Hall, Shore Road and driveways, and State Route 28 the visibility ranges from “a fairly consistent view of the tower between buildings” to “tower is significantly skylit” to “considerably skylit in most pictures.”

While the tower is “in the vicinity of existing settlements” within the hamlet, the Council says it is not clear how the tower “will be located to avoid undue adverse impacts as to be substantially invisible” as the policy requires.

“We encourage the APA to minimize the height of the cell tower to the greatest extent practicable to protect the aesthetic value of the surrounding landscape,” Janeway said. “The Council urges the APA to exhaust all opportunities for collocation and examine locating communication infrastructure on existing structures in the town of Inlet.”

“We call upon the APA to respect the integrity of the Tower Policy and take the necessary steps to ensure that any approvals granted this cell tower meet the requirements of the current policy and include our recommended conditions,” he concluded. “We believe it is possible to expand and improve cellular service while still preserving the integrity of the Towers Policy and the scenic beauty of the Adirondack Park.”