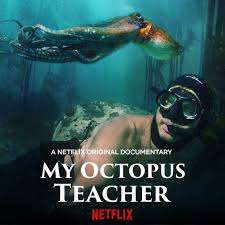 The Champlain Valley Film Series has announced the Home Together Winter Film Series, featuring five movies that can be watched from home, followed by a discussion about the film by a special guest.

Participants are to watch the film, My Octopus Teacher (now streaming on Netflix) on their own, and join for a live Zoom “Reel Talk” on Saturday, January 16th at 7:30 pm, featuring a discussion on the movie with Richard King, author of three books about human relationship with marine life including Lobster and, most recently, Ahab’s Rolling Sea: A Natural History of Moby Dick. He is also the author/illustrator of the quarterly column, “Animals in Sea History.” More information can be found on his website.

Questions may be submitted to the moderator and will be responded to in the second portion of the program.

This is the first movie in the Winter Home Together Series, upcoming movies include: Ma Rainey’s Black Bottom on January 30th; Collective on February 13th; The Personal History of David Copperfield on February 27th; and Mangrove on March 13th.

Zoom discussions are open to the public, but registration is required. For more information or to register, visit the Whallonsburg Grange Hall’s Website.