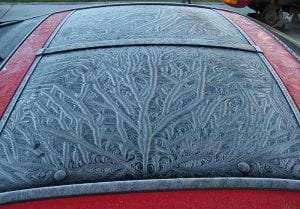 Some people are good at finding the silver lining in just about any cloud that passes over their life. On the other hand, I can often locate a sepia tone in a bright sunburst, which is why I need to complain about energy-efficient windows for a minute.

Years ago, even newly built homes used to leak a great deal of warmth out the windows. Most houses in the Northeast had double-hung windows with a single pane of glass, which was OK for three seasons. Then each fall, homeowners would drag out their ladders to install the storm windows, generally single-pane as well. Although these windows were anything but efficient, no one seemed in a hurry to find a better design until the energy crisis of the 1970s made it a necessity.

The thermal resistance, or insulation efficiency, of a material is expressed in unit-less “R” A one-inch sheet of plywood has an R-value of one, while an inch of foil-faced insulation may have an R-value of 19 or more.

However, a single pane of glass has an R-value of 0.07. It’s easy to see why older windows can be a serious “energy nosebleed.” New construction these days employs double or even triple-pane windows. To make them even more efficient, some high-end units come with inert gas between the panes, and/or special coatings.

So big deal, houses are warmer now and require less gas or oil to heat – they’re missing out on the magic of window ferns.

If there’s one redeeming feature of an old-fashioned, single-pane window (and there may be only one), it’s that on a cold winter morning, you wake up to exquisite freshly sculpted art work etched on every piece of glass. Water vapor inside the home condenses and freezes onto cold glass in complex fractal patterns which often resembles ferns, flowers or tree branches. Ice “nucleates,” as it’s called, in different ways onto a window depending on how smooth the glass is, and even what kind of dirt or dust is on it.

Fractals are naturally occurring, repeated patterns that we see in such things as snowflakes, ocean waves, peacock feathers, lightning bolts and sea shells. Biologists, mathematicians, and others who study fractals know that there are some pretty complex equations to describe them. Being math-challenged, these calculations would mean nothing to me. All I know is that fractal ice patterns on glass are breathtaking. But maybe it’s the cold mornings I’m thinking of that take away my breath.

Another “plant” in winter’s garden is often called a frost flower. You may have seen masses of cottony ice filaments pushed out of a water-soaked log in the woods. My kids used to be fascinated by the frost flowers that sprouted on frigid March mornings from a patch of sodden earth behind our house. Technically, frost comes from from condensed water vapor, so it’s more precise, if less alliterative, to term these ice flowers.

Talking about hoarfrost may elicit a few raised eyebrows, but it’s not a curse word. The Old English word for grizzled – hoar – is used to describe the gossamer ice crystals that festoon every frozen surface that contacts a humid air mass. During a cold snap, intricate ice feathers grow on branches, twigs and grasses near any open water, and are the subjects of many pictures. Some of world-renowned artist Andy Goldsworthy’s sculptures are meant to be ephemeral.

Works created from twigs, snow or ice are left to efface in the elements. This of course happens with natural works of art. As the woodstove heats up, window ferns melt. Frost flowers wilt as the sun comes out.

But even if you took some of the more striking ice-art into a deep freeze, they’d gradually disappear. Ice sublimates, meaning that it evaporates directly from a solid to a gas without needing to first become liquid – one of many strange and wonderful properties of water. Frozen laundry will actually dry on the clothesline, especially in sunny, low-humidity conditions, if you don’t mind waiting a day or possibly two. On the plus side, freeze-dried clothes are almost wrinkle-free.

I hope everyone has the chance, at least once, to experience the sublime beauty of window ferns. And after that, the deep appreciation of a warm, energy-efficient home.