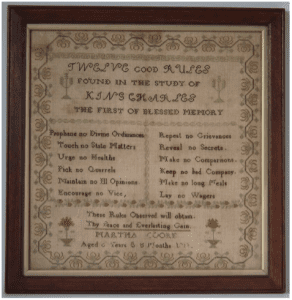 The advice to customers consisted of “Twelve Good Rules” that dated back to the rule of Charles I: 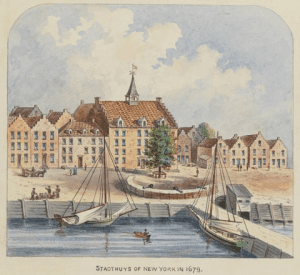 Although impossible to keep when in the jolly company of fellow boozers, these requirements do not seem unreasonable – but why should there be a ban on toasting in a tavern?

According to Greek historian Diodorus Siculus, Alexander the Great was struck with pain after drinking a large bowl of unmixed wine in honor of Hercules. It has been speculated ever since that the king was poisoned. We will never know as many of his contemporaries died of consuming bad wine. The custom of drinking to health is, in other words, more than just an expression of cordial relations. 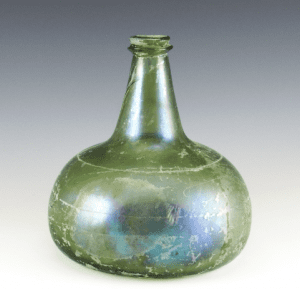 Romans tended to add a chunk of burnt bread (“tostus” in Latin) to each glass in order to remove bad flavors from poor wines. The habit persisted and spread to England. At some point along the way, the gesture of clinking glasses became fashionable and may have been intended to produce a bell-like noise so as to repel the devil. Any exorcist will confirm that evil spirits flee the sound of bells.

By the sixteenth century a toast simply implied the drinking of a glass of wine with a chunk of burnt bread at the bottom. The verb “to toast” did not come into circulation until after the Restoration (1660-1666). The shift in meaning is associated with the reign of Charles II and his liking for the city of Bath where the rich and affluent traveled to take a dip in one of the natural thermal baths, indulge in fine food and drink, listen to enchanting music, and enjoy the dubious delights of moral relaxation.

Toasting soon became popular and even more pervasive during the boozy eighteenth and early nineteenth centuries. As new institutions emerged, novel roles were created, most notably the task of toastmaster. He elevated the toast to an art form, a sign of polite conversation and etiquette, and a measure of refined diplomatic discourse (a skill lost in the Age of Twitter).

On the other extreme: toasting was an exercise in banality and ribaldry. Over the years, binge drinking prompted a legion of moralists to oppose toasting and its attendant evils. They attacked the indecency of toasts and the general climate of boisterous mirth. In 1791, Drury Lane bookseller John Roach published The Royal Toast Master with the intention of cleaning up the custom.

At the same time, the toast became ammunition in the arsenal of activists. In the heated political climate of the late eighteenth century, it was part of the liberal’s weaponry. Glasses were raised to “The Abolition of Slave Trade,” “The Rights of Man,” or “The Liberty of North America.”

Toasting created such political controversy that scribblers attended meetings in order to report on the toasts that were drunk. As inn keepers demanded peace and profit, they tried to temper the tantrums of rabble-rousers. 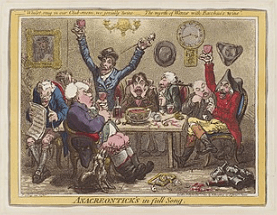 In America, urban taverns were the centre of civic life. Francis Lovelace was New York’s second governor. A supporter of Charles I during the English Civil War, he owned the Lovelace Tavern in Lower Manhattan which operated from 1670 until it burned down in 1706 (the original foundation walls have survived at 85 Broad Street). Built in 1642, it was located right next door to the Stadt Huys, New York’s first City Hall.

Many archaeological remnants relating to the tavern have been recovered. They consist mainly of smoking pipes (imported from Gouda, Amsterdam, or Bristol) and onion shaped bottles – used for holding rum, wine, or even ale – that date from the later decades of the seventeenth century. Alcohol and tobacco fueled debate.

Colonial pubs and taverns were hot spots where political discussions took place and formal toasts were drunk to independence, liberty, and human dignity. The 1776 toast “May Stipenders and Pensioners [bureaucrats and parasites] Never Sit in an American Senate” reflected the traditional Whig anxiety of an over-powerful government. 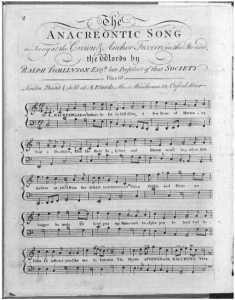 The toast “Freedom from Mobs and Kings” demonstrated a belief in democracy and the rule of law. During the darker days of the Revolution toasts were expressed to curse the opponent: “May the Enemies of America Be Destitute of Beef and Claret.” What could be worse than that?

In the spring of 1783, citizens gathered in towns and cities across the nation to celebrate the signing of the Preliminary Articles of Peace which brought an end to the Revolution. Revelers drank a total of thirteen toasts (one for each colony), carefully recorded by reporters and newspaper editors.

For many years to come, the thirteen toasts would be obligatory at local Fourth of July celebrations, followed by an artillery salute, and three cheers from the crowd. During that period, General George Washington was the person singled out for special mention. His name became the cultural symbol helping to unite a collection of disparate colonies into a more coherent union.

Washington was the toast of the nation. 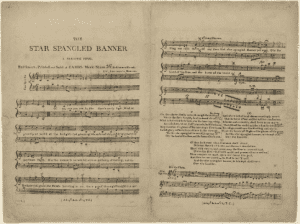 London’s Crown and Anchor tavern in the Strand was known for its musical pleasures. The Academy of Music was instituted here in 1710. In this house, Handel’s first oratorio Esther was performed privately on February 23, 1732 under the direction of Bernard Gates.

The public house was also home to the Anacreontic Society. Inspired by Anacreon’s ancient Greek poems dealing with love and wine, this gentlemen’s club was founded in 1766. While the Society’s male-only membership was dedicated to “wit, harmony, and the God of wine,” its primary goal was to promote an interest in music. Franz Joseph Haydn was their special guest at a concert in January 1791.

Two of its members, Ralph Tomlinson and John Stafford Smith, are remembered to this day. The latter was a skillful exponent of catches and glees. These were distinctly English forms of part song for male voices. The catch was known for its (crude) humor and was popular from the late sixteenth century; whilst the glee with its more refined subject matter was promoted from the mid-eighteenth century. Both glees and catches became the focus of (socially exclusive) musical gatherings in the eighteenth century.

Between 1776 and 1799, Stafford Smith published five collections of such tunes. The last book contains his harmonized version of “To Anacreon in Heaven.” With words by Ralph Tomlinson, it became widely known as the “Anacreontic Song.” It was both a musical toast and a drinking song:

“While thus we agree, / Our toast let it be.
May our club flourish happy, united and free!” 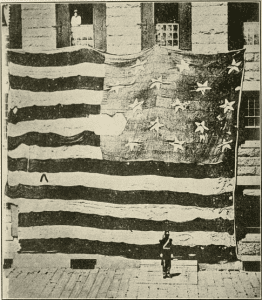 A popular tavern tune on both sides of the Atlantic, the song became even better known in America when new words were supplied by Francis Scott Key.

The latter renamed it “Defence of Fort McHenry” while he was detained on a ship during the night of September 13, 1814 when, for twenty-five hours, the British Navy bombarded the Baltimore fort from the estuary of Chesapeake Bay.

Smith’s tune, with words by Key is today known as the “Star-Spangled Banner.” In 1931 it was adopted by Congressional resolution, signed by President Herbert Hoover, as the national anthem of the United States of America.

Illustrations, from above: Sampler by Martha Cooke, Twelve Good Rules, 1811; Louis Oram: Stadthuys of New York in 1679 (Museum of the City of New York); Dutch onion bottle; The Royal Toast Master; Anacreontics in Full Song by James Gillray 1801; The ‘Anacreontic Song’ published in 1784 by Anne Bland at no. 23 Oxford Street; The earliest surviving sheet music of ‘The Star Spangled Banner,’ 1814; and Flag that floated over Fort McHenry in 1814.