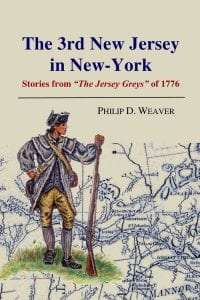 The new book The 3rd New Jersey in New-York: Stories from “The Jersey Greys” of 1776 (Continental Consulting, 2020) by Philip Weaver is the culmination of over 35 years of primary source research. The book includes reworked material previously published in The Brigade Dispatch and the on-line magazine Journal of the American Revolution.

Colonel Elias Dayton’s newly formed 3rd New Jersey Regiment mustered in New York City on May 1, 1776 as part of the 2nd establishment of the Continental Army. Sent to Canada with Brig. Gen. John Sullivan’s relief force, it was diverted at Albany to handle Indian-Loyalist concerns in the Mohawk Valley. Come October, the entire regiment left to reinforce Fort Ticonderoga, Mount Independence, and their dwindling garrisons. After a difficult winter, they were finally able to return home in the Spring of 1777.

The book features nearly 270 footnotes, bibliography, and mini-biographies of some of the personalities that interacted with the regiment during its service, including primary sources as the Philip Schuyler Papers, Peter Force’s American Archives, Joseph Bloomfield’s journal, two other journals, original company account books, period documents, muster rolls, and pension records.

Phil Weaver is a retired systems analyst. A living historian for over forty years, he is a highly regarded tailor, presenter, and independent researcher. Phil’s articles on the colonial period and living history were first published nationally in 1979. An original member of the West Point Chapter, Company of Military Historians, he was elected a Fellow of the Company (May 2004). He is also the editor and principle author of The Greatest Hits of The Colonial Chronicle: The Rev-War Collection (2016).

The book price is $21.95, ordering details can be found online.

Retail credit card orders may be accomplished thru the Fort Plain Museum Bookstore. All copies are signed.