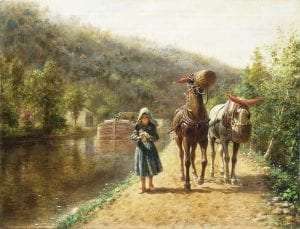 During the month of December in 1824, brothers William and Maurice Wurts were diligently planning a presentation to potential investors in their ambitious project to build a canal connecting their coal fields in northeastern Pennsylvania to the Hudson River.

That presentation, outlining the advantages and applications of anthracite coal, took place on January 7, 1825 at the Tontine Coffee House on Wall Street in Manhattan, a center for buying and selling stocks and other business transactions. It was a huge success, as the brothers were able to raise $1.5 million in just a few hours. (That’s nearly $40 million in today’s dollars.)

“The books opened yesterday agreeably to notice at the Tontine Coffee House, for subscription to the stock of the Delaware and Hudson Canal Company, with a capital of $1,500,000 were filled, as we are informed, at a little past 2 o’clock,” the New York Evening Post reported the next day.

The D&H Canal opened in 1828, and its impact on Sullivan County — which just happened to be along the route – is inestimable, as entire communities were formed here as a result, and for the first time goods could be easily transported into and out of the county. The population of Sullivan County more than doubled in the first 20 years of the canal’s operation, from about 12,000 in the 1830 census to more than 25,000 by 1850.

The canal also played a huge role in fueling the industrial revolution in America by transporting coal, bluestone, and other goods to New York City, while employing thousands, including women and children.

The story of the canal is told well by a number of organizations, including the National Park Service, and the D&H Canal Museum in High Falls, which continues to raise the bar for both research and narrative. But the story of the role that children as young as 10 years old played in the D&H operation is one that is only recently drawing attention. The non-profit history education group, The Delaware Company, and in particular its Executive Director, Debra Conway, has been leading the way in telling that part of the canal’s story, and has recently taken a big step toward memorializing it.

Partly inspired by a romanticized painting by E.L. Henry, “The Kate Project” is the group’s multi-phase undertaking that will eventually involve construction of a half-mile extension of towpath along the Delaware River just south of Roebling’s Delaware Aqueduct, the creation of seating areas to include stone benches and interpretive signs, a canal snubbing post, and a bronze sculpture of a hoggee — a canal worker, often a child, who was tasked with caring for and guiding the mules that pulled the boats.

“The project is intended to tell the canal’s lesser-known stories, such as the bluestone industry in the river valley that utilized the canal in its early days and later developed connections to Boss Tweed and Tammany Hall,” Debra Conway explains. “And we want to especially highlight the role of the children, some of them orphans adopted out of the overcrowded foundling homes in New York City and put to work tending the mule teams that pulled the boats. These boys and girls woke up early to feed and outfit the teams, walked 18-20 miles a day alongside them, and then prepared them for ‘bed’ at the end of the day. It has been said that the mule teams were often treated better by the boat owners than the hoggees, because they were more expensive to replace.”

The project has been in the planning stage for nearly two years, and ongoing fundraising efforts have landed three substantial grants — and a number of smaller donations – to enable the physical work to begin last week.

Painting: “On the Towpath,” by E.L. Henry, a painting depicting a girl hoggee on the D&H Canal.