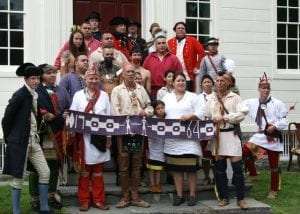 Long-term plans for the Johnson Hall State Historic Site call for enhancements to more fully describe the historic role that the Mohawk and other Native peoples played in colonial-era New York.

A new master plan for the 33-acre site in Johnstown, Fulton County, which is the former residence of 18th century British colonial official Sir William Johnson, calls for a cultural reinvigoration of the site including construction of a longhouse, a trade house and a blacksmith’s shop.

State Parks also recently acquired a 3.4-acre adjoining parcel at 137 Hall Avenue to add to the historic site, which once covered an estate of about 700 acres. The parcel is expected to provide room to implement recommendations from the plan, including replacing a small existing visitors center with a modern new center to include restrooms, historical exhibits, a gift shop, staff offices and a kitchenette, as well as expanding the historic site’s trail network.