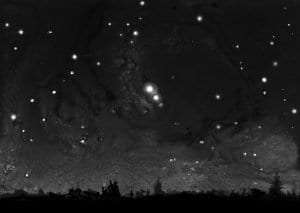 One night just before Christmas last year, my youngest daughter and I opted to walk the short distance home from dinner at my parents’ house, rather than drive with the rest of the family. Our eyes adjusted to the night, and the snow beneath our feet shimmered, even in the winter darkness. As we emerged from the cover of trees into our open field, we were thrilled to see so many stars shining brilliantly in the night sky.

Winter stargazing is one of the highlights of this season, as early nightfall allows those of us who are members of the early-to-bed crowd to watch the dark sky before bedtime – even before dinner this time of year. As we approach the longest night of the year, there is lots to see in the night sky: a glowing-orange Mars, a rare conjunction of Saturn and Jupiter, and meteors blazing through Earth’s atmosphere.

“There’s no one best season for stargazing – every season has something of note,” said astronomer John Gianforte, director of the University of New Hampshire Observatory. “Winter boasts more bright stars than any other season.”

Gianforte noted the winter hallmark constellations of Orion, with its famous stars Betelgeuse and Rigel; Gemini and its twin stars Castor and Pollux; and Canis Major, which contains the sky’s brightest star: Sirius. Those constellations, along with Canis Minor, Taurus, Cassiopeia, and Perseus have been telling the winter sky’s stories for eons.

But the big event occurring on the evening of this year’s winter solstice, one that has been building up through the summer and fall, is the great conjunction of Saturn and Jupiter. Both planets are remarkably bright, and unlike the stars, which seem to shimmer, the planets shine steadily. Jupiter has a yellowish tinge, Gianforte said, while Saturn is dimmer and cream-colored.

Regular night sky watchers will have noticed the two planets gradually drawing nearer to each other through the fall. While Saturn and Jupiter appear quite close together in the sky every 19 and three-quarters years, this is the closest they have been since 1623. They’ll be only one-tenth of an angular degree apart – a fraction of the width of your little finger if you hold your hand at arm’s length and look toward the planets.

“Saturn has an orbital period of 29.65 years around the sun, and Jupiter takes 11.86 years to go around the sun once,” said Gianforte. “It’s that relationship in orbital periods that determines how long it takes for them to meet up in the same part of the sky. And every time they do that, it’s not the same distance in terms of placement in the sky together. This one is a close pairing, which makes it special.”

Sky-gazers with a telescope will be able to see both planets in the same field of view, Gianforte said. Also visible with a small telescope will be the Galilean Satellites – four moons discovered by Galileo – flanking Jupiter, along with Saturn’s rings and one of its big moons.

But the planets will be easily visible to the naked eye, assuming the evening is clear. Sunset on the Solstice is at 4:16 pm, and Gianforte said Jupiter should be visible just as the sun sets. The planets will appear low in the southwest sky as darkness falls. They’ll drop below the horizon just before 6:30 pm.

From Saturn and Jupiter, look east to find the first-quarter moon. Further east, the bright orangey glow of Mars will be visible high in the sky. That planet, too, has been increasing in brightness since the summer. While Mars’ intensity is fading now, it is still prominent, without any other bright objects in close proximity to its part of the night sky.

The Ursids meteor shower will also peak the morning of December 22nd, giving night sky gazers a chance to see “shooting stars.” But they’ll have to turn away from the planets and look northeast. “The radiant for this shower – the apparent point of origin in the sky – is just above the bowl of the Little Dipper,” Gianforte said. “That’s the opposite side of the sky from where you’ll be looking for the Jupiter-Saturn conjunction.”

Meteors tend to be visible later in the night – after midnight – than the brightest planets shining around the Solstice. That, and the fact that nearly 15 hours separate sunset and sunrise, means there’s something for every kind of winter stargazer, whether they’re night owls or early birds.

Meghan McCarthy McPhaul is assistant editor for Northern Woodlands. The illustration for this column is by Adelaide Murphy Tyrol. The Outside Story is assigned and edited by Northern Woodlands magazine and sponsored by the Wellborn Ecology Fund of the New Hampshire Charitable Foundation.