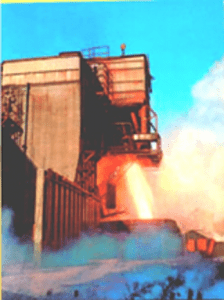 On Christmas morning, December 25th, 1945, the residents of Saratoga County were startled by a loud noise. It was not the clatter of Santa’s reindeer on the roof but instead America’s race to the Moon had begun.

Toward the end of the Second World War the American Army became concerned about the V-2 missiles Germany was raining on London so they asked that engineers from the Schenectady General Electric plant go to Europe and interview the captured German scientists and select the papers, drawings and actual rocket parts to be shipped back to America. A team, under the direction of Dr. Richard Porter, went to Peenemunde and Nordhausen where the rockets had been developed. They interviewed Werhner von Braun and his team and confiscated papers and drawings, including actual rocket parts. The team identified which scientists and engineers should be brought back to the States. The campaign was code named “Operation Paperclip.”

Simultaneously another General Electric team was tasked with finding a convenient but secluded spot to build a test facility. They found it tucked among the towering pines of the Luther Forest Preserve, a 7,000 acre forest sanctuary in the towns of Malta and Stillwater that had been developed by the Luther family. The Army took 165 acres of the vast forest by eminent domain and later added a security zone – a one mile area in all directions from the main facility in which “No one can inhabit, stay overnight or carry guns.” Here, the Malta Rocket Test Station was constructed and from 1945 until the mid-1960s, rocket engines were assembled and put through stationary ground tests (i.e. the engine were harnessed to a large gantry). No flight tests were ever conducted at the facility. The results were heard miles in Clifton Park and Ballston Spa while nearby residents still describe how plates rattled on the kitchen table.

The program was named Hermes, after the messenger of the Greek gods. At first the rockets were exact copies of the German V-2 rockets but soon the program truly became American. Among the missile and satellite programs that were tested here were the Bumper, Vanguard (first to lift a satellite in orbit), Vega, Discoverer, Centaur, Polaris and Skybolt. In addition to the rocket motors, work was done on various liquid fuels and heat resistant materials for nose cones.

In 1964, the site was sold to the New York State Energy Research & Development Authority which still occupies a building on the grounds. In 1972, a portion of the complex was sold to the Wright-Malta Co., composed of former General Electric  employees who continued with ordinance testing and energy related research throughout the 1980s.

The Empire State Aeroscience Museum, located on the grounds of the Schenectady Airport, has a wonderful interactive display that gives the feel of what it must have been like to witness a 50,000 horsepower motor being tested nearby.

Photo of View of Rocket Test from Observation Bunker.