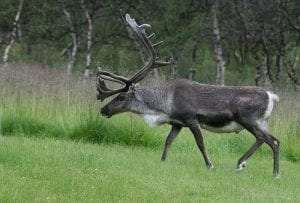 Reindeer have been soaring since long before Christmas came into being. For some reason, the fly agaric mushroom (Amanita muscaria), a lovely red-and-white polka-dotted ‘shroom bearing an uncanny resemblance to a Christmas ornament, is attractive to these creatures. It’s also hallucinogenic, and Comet, Cupid, and loads of other blitzed reindeer have been observed lurching about after munching the mushrooms (Santa’s sleigh makes more sense after you learn about this little reindeer game).

Regrettably, flights of any sort will become less frequent for these animals, as their population is in steep decline as a result of a warmer Arctic.

Reindeer (Rangifer tarandus), or caribou as we know them in North America, don’t make a habit of psychedelic trips or they could not have survived for the past 640,000 years, the approximate age of the oldest known reindeer fossil. Native to Arctic, subarctic, and tundra regions throughout the northern hemisphere, reindeer are the second-largest (after moose) member of the deer family.

They have had a long and close relationship with humans, even outside of the Christmas season. For thousands of years, many indigenous peoples depended largely, and some solely, on these majestic animals in order to survive; in fact, the term caribou itself comes from the Mi’kmaq word qalipu. More than a dozen thriving peoples still rely on this species today, including the Inupiat of Alaska, the Inuit and Gwich’in of Canada, and the Sámi of the Nordic countries and northwest Russia.

Santa’s reindeer-powered sleigh entered pop-culture in the early 19th century, and to his credit, Saint Nick got his facts mostly right. His team is depicted with antlers, which would normally get him a failing grade in biology. Among deer species, males’ antlers grow in springtime and drop each fall. In addition, only males are generally so endowed. If Santa used elk or moose, his entire coterie of coursers would’ve been just as bald-headed as the old man himself, and where’s the grandeur in a silhouette like that?

Father Christmas must be thankful that reindeer, which happen to have the longest antlers of any animal in the world, are exceptional among the deer clan in that females and males alike sprout fancy headgear. Another oddity is that females exclusively are able to retain their antlers into the New Year. Yep – Rudolph, Donner, and all the rest are girls. Over a century ahead of their time, it would seem. 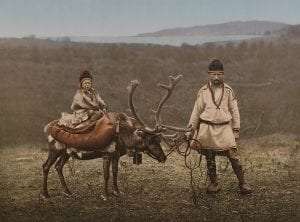 Even the idea of naming these presumably wild animals is true to life. The Sámi people, who traditionally managed feral reindeer herds, didn’t name every animal, of course, or they would not have had time for anything else. They did label those few reindeer which were trained to pull sleighs, though, a practice which continues today among Sámi herders.

And finally, airborne gift delivery may have been a necessary brainchild of Santa, given the fact that a reindeer’s leg tendons click loudly as it walks or runs. It’s hard to sneak up on sugar-hopped kids with eight reindeer making a racket like hail on a tin roof. Drone transport would be quiet as well, though it lacks any of the magic and romance of a flying sleigh.

We certainly hope that Père Noël never needs to resort to a commercial delivery service, but global reindeer numbers are down 40% in the past 25 years, as reported by the International Union for the Conservation of Nature. In Canada, the decline has been 60% during the same time-frame, with some alarming details. The George River caribou herd, which ranges across Newfoundland and Labrador as well as northern Québec, numbered about 800,000 twenty years ago. Today that figure is about 5,000, a loss of over 99% in a few short years despite a complete ban on hunting.

There are various factors driving this extreme loss, but the main one is a spike in northern temperatures over the past two decades. One problem with the phrase global warming is that it sounds like we need to wait for it, as if someone has pressed the oven’s preheat button and now we have to stand by until it’s ready. To us and other mid-latitude residents, most of whom have experienced little warming, this may sound accurate.

On the other hand, those who live in the Arctic and subarctic (including non-human animals) know that hotter temperatures have already arrived in high-latitude regions – past-tense; been there, done that. Perhaps one could reasonably debate how fast the planet is heating, or when it will be fully cooked, but no one can argue with what’s here right now.

The National Snow and Ice Data Center reports that Arctic temperatures have risen 7.6 degrees Fahrenheit since 1960. According to the Intergovernmental Panel on Climate Change, the last time the Arctic was this hot was three million years ago – that’s way the heck before reindeer were invented. As a species, reindeer have never seen weather like this.

A steamier Arctic threatens reindeer in ways I never would have imagined. Studies show that longer and hotter summers have caused sharp increases in the populations of insect pests. Particularly bad are the reindeer warble fly and nose botfly, two parasitic flies whose larvae eat into the tongues and noses of caribou. They cause such damage and pain that reindeer will stop eating, or even birthing.

Anything we can do to conserve energy or reduce consumption will help limit Arctic warming. As the Dalai Lama reportedly said, “If you think you’re too small to make a difference, try sleeping with a mosquito.” It’s easy to feel as though our efforts are futile when they’re a drop in the bucket, but hey – that’s how buckets get filled.

You could make a whole bucketful of difference if you’re in a position to swap a big SUV or pickup for a car. Certainly, farmers and many other folks depend on such items to merely survive. But those vehicles are by no means appropriate for commuting in. If a pickup isn’t literally putting food on the table, it’s killing reindeer needlessly. How will we explain this to the kids?

Let’s be brave and do more than we think we can. If we all find the courage to make a small concession, it will definitely have an impact on the Arctic. Think of it as a gift to Santa.

Photo of reindeer above courtesy Wikimedia user Are G Nilsen; below, A Smai man leads a child riding a working reindeer.