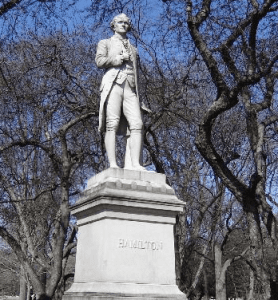 A press release from the New York City Parks Department announced “In honor of the 51st anniversary of Black Solidarity Day … 10 park spaces” would be named in “honor of the Black experience in New York City.” This was intended to fulfill a pledge made by the Parks Department “to demonstrate how it stands in solidarity with the Black Community in its fight to combat systemic racism.”

The newly named park spaces recognize national figures like Langston Hughes, James Baldwin, Elston Howard, and Ella Fitzgerald who all had New York ties and were local community leaders. Baldwin gets a lawn in Harlem. Langston Hughes gets a playground. Elston Howard, a baseball MVP for the Yankees, gets a baseball field near Yankee Stadium. Ella Fitzgerald gets a playground in Queens. 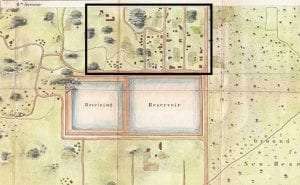 It’s about time and it is definitely not enough. New York City’s magnificent Central Park in the heart of Manhattan was built after Black residents of Seneca Village were evicted, their homes were leveled, and a few who could document land ownership received minor remuneration. The average land value in Manhattan today is about $1,000 a square foot. Central Park is about 35 million square feet. If those Black families had been allowed to keep their land and pass it on to their descendants, it would be worth billions of dollars.

On July 9, 1856, the New York Daily Times published an article, “NEW-YORK CITY, The present look of our Great Central Park.” I am editing out one word that was not edited out in the original. According to the article: “West of the reservoir, within the limits of the Central Park, lies a neat little settlement, known as ‘N—–r Village.’  The Ebon inhabitants, after whom the village is called, present a pleasing contrast in their habits and the appearance of their dwellings to the Celtic occupants, in common with hogs and goats, of the shanties in the lower part of the Park.

“They have been notified to remove by the first of August. The policeman find it difficult to persuade them out of the idea which has possessed their simple minds, that the sole object of the authorities in making the Park is to procure their expulsion from the homes which they occupy. It is to be hoped that their removal will be effected with as much gentleness as possible.” 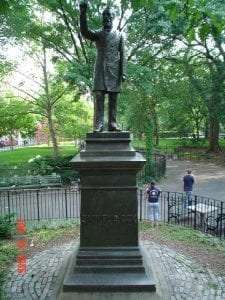 If the New York City Parks Department wants to address systemic racism it has to do more than rename a lawn in Harlem. At Thomas Paine Park at Worth and Lafayette Street a statue honors colonial New York Mayor and slaveholder Abraham De Peyster. In Tompkins Square Park in Manhattan’s East Village a statue honors Samuel Cox. While in Congress, Cox led the fight to block the 13th amendment ending slavery in the United States. There is a statue of Peter Stuyvesant on Parks Department land at 2nd Avenue and 16th Street. Stuyvesant was a vitriolic anti-Semite and the largest private slaveholder in the Dutch New Amsterdam colony. Statues of Roscoe Conkling and Chester Arthur in Madison Square Park celebrate Civil War profiteers and corrupt politicians. In Central Park, there are statues of Daniel Webster, who as a Senator agreed to passage of the 1850 Fugitive Slave Act, and Samuel Morse, an inventor and rabid nativist.

You can’t blame William Dodge, whose statute is in Bryant Park in Manhattan, for founding a company that became synonymous with union busting after his death. But you can blame him for making his fortune by brokering slave-produced cotton and exporting it to England. 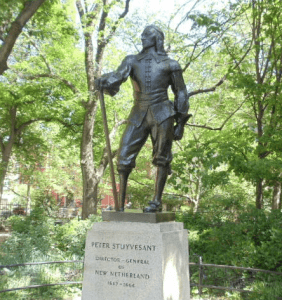 In the Bronx, John Mullaly, who was indicted in 1863 for inciting anti-Black anti-draft riots has a park named after him near Yankee Stadium. In Queens there is a Francis Lewis Park named after a signer of the Declaration of Independence who was also a slaveholder and slave trader.

Staten Island has a Douglas MacArthur Park, the general who was fired by President Truman for disobeying orders during the Korean War and who led a cavalry charge against First World War veterans who were protesting in Washington, DC for a promised military bonus during the Great Depression.

Because of Broadway show Hamilton portray him as an opponent of slavery, few question the Alexander Hamilton statue in Central Park. However recent scholarship produced by the New York State Office of Parks, Recreation, and Historic Preservation documents Hamilton’s activities as a slave trader and that he and his wife personally owned and “rented” enslaved Africans who acted as their household servants.

Langston Hughes and Ella Fitzgerald now have playgrounds named after them, James Baldwin a lawn, and Elston Howard a ball field. The New York City Parks Department has a long way to go to address a history of racism before it should be congratulated.