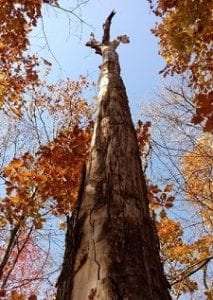 Some of the most important trees in your woodlot are the ones that are no longer alive. Large, standing dead or dying trees are an important part of healthy forests and a critical habitat feature for wildlife. They provide places for many birds and mammals to forage, den, nest, perch, and roost.

Dead and dying trees are important for cavity-nesting birds like woodpeckers, nuthatches, and chickadees; for bats that roost within cavities, crevices, and flaky bark; and for countless species that rely on insects, fungi, and lichens as a food source. As long as they aren’t in a hazardous location such as near a road or building, consider leaving them for wildlife.

In woodlands where dead and dying trees are sparse or absent, it’s possible to create a few by topping, girdling, or simply leaving several mature trees as legacy trees for the future. Biologists recommend having at least three large dead or dying trees (>12” diameter) per acre to benefit wildlife. These stately spires also add structural complexity, provide an element of visual interest, store carbon, reflect a forest stand’s past, and will enrich soils in the future.