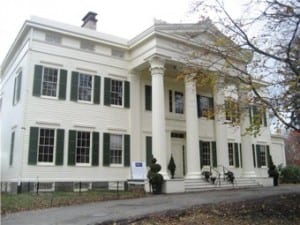 Lori has grown over forty different kinds of fruits, vegetables, cover crops, and heritage waterfowl on land previously used for lawn. Her work has appeared in publications such as Backyard Poultry, Countryside, Acres, Grit and EcoWatch.

Lori lives in Rye, New York, where she serves as Vice Chair on the city’s Conservation Commission/Advisory Committee. She is also a member of the Rye YMCA Cross-District Wellness Committee and a board member of the Food & Environment Reporting Network (FERN). An alumna of the Bread Loaf Environmental Writers’ Workshop and the Sundance Film Festival, she speaks frequently about healthy food, climate change, and the environment at venues around the region. Lori received an MFA in Creative Writing from Manhattanville College, where she is an adjunct professor.

For more information about Jay Heritage Center, visit their website.