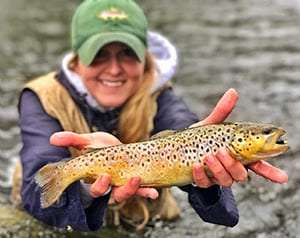 That section of the creek has not been stocked since the early 1990s because of the healthy wild “Rome Strain” trout population present.

Milt (sperm) is collected from the Oriskany Creek males and transported back to the Rome Lab where it’s mixed with eggs from hatchery females. Infusing wild fish genetics and traits into the DEC hatchery brood stock better adapts Rome Strain brown trout to life in streams after stocking, ultimately increasing their survival and recruitment to a fishery.

While the project is in its fifth year, the first stocking of these brown trout descended from an Oriskany milt collection will begin (partially) in 2023 and fully replace the current brown trout stock in 2024. To date, only experimental streams in various regions of NYS have received these fish, though DEC staff say the results have been encouraging.

Photo of woman angler with brown trout provided by DEC.