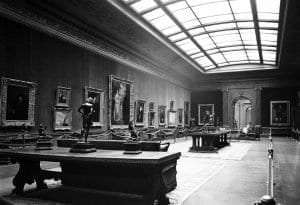 The Frick Collection is set to celebrate the 85th anniversary of its opening with a range of free content across its digital platforms.

On December 16th, 1935, the museum opened its doors to the public, sharing with New York City and the world Henry Clay Frick’s extraordinary art collection and the Fifth Avenue Gilded Age mansion that houses it. The Frick is famed for its masterpieces by Bellini, Fragonard, Gainsborough, Goya, El Greco, Holbein, Houdon, Ingres, Rembrandt, Renoir, Turner, Vermeer, Whistler, and others.

This anniversary comes as the museum and library prepare for renovations of their historic buildings and the temporary move to Frick Madison. Works from the permanent collection will be displayed for the first time chronologically and by region in the Marcel Breuer designed building on Madison Avenue during a two-year installation, scheduled to open in early 2021. Additionally, 2020 marks the 100th anniversary of the Frick Art Reference Library’s founding in 1920 by Helen Clay Frick, Henry Clay Frick’s daughter.

The Frick is sharing this anniversary virtually through new programs and content. Ian Wardropper, the Frick’s Anna-Maria and Stephen Kellen Director, welcomes visitors to the festivities in a short video discussing the museum’s history and anticipating the installation at Frick Madison. Two new episodes of the Frick’s series Cocktails with a Curator, which premiere every Friday at 5 pm, will bookend the anniversary celebration and offer insights on the history of the collection. In the program that airs on December 18th, Deputy Director and Peter Jay Sharp Chief Curator Xavier F. Salomon will speak about Malvina Hoffman’s 1922 Bust of Henry Clay Frick, commissioned by Helen Clay Frick as a tribute to her father. The portrait, displayed in the entrance hall, has welcomed visitors to the museum for decades. This series airs on the Frick’s YouTube channel, where viewers can access past episodes along with recipes for the specially selected cocktails that complement the subject of each episode.

Buku Pongo most recently worked at the Palace of Versailles, where she assisted Bertrand Rondot, Chief Curator of Decorative Arts, and Hélène Delalex, Curator of Decorative Arts, to prepare the upcoming exhibition Versailles and the World for the Louvre Abu Dhabi. In 2017, with Rondot and Danielle Kisluk-Grosheide of The Metropolitan Museum of Art, she assisted in the preparation of the critically acclaimed touring exhibition Visitors to Versailles: Travelers, Princes, Ambassadors (1682–1789). As Senior Assistant and Acting Head of Service in the Mission Ameublement at the Mobilier National, she collaborated with Valérie Glomet, Head of Service, and undertook a number of projects requiring an in-depth knowledge of eighteenth-century through contemporary French furniture and tapestries. She advised and managed the furnishing of the Élysée Palace (the official residence of the President of France), including the offices of President Macron and the First Lady, as well as the official residences of the French President, offices of the Prime Minister, offices of several Secretaries of State, the French Senate, the French Parliament, and French embassies around the world. Buku Pongo has advised on diplomatic gifts and assisted in the display and care of Versailles’ permanent collection, particularly the living quarters of Marie-Antionette and the daughters of Louis XV. She is currently a member of the committee for the upcoming exhibition D’Artagnan and the French Musketeers in the Château de Vincennes.

Giulio Dalvit is a specialist in fifteenth-century Italian art. He brings to the Frick an expertise in Italian bronze sculpture, as well as paintings from the Renaissance through the present. This past year Dalvit collaborated with the curatorial team led by Salomon to organize the installation for Frick Madison, the institution’s temporary new home during the renovation of its historic buildings at 1 East 70th Street. His input on the project informed the display of sculpture and medals within the broader context of the permanent collection. He also contributed content to the museum’s new audio guide for the Bloomberg app, which launched in June and will be the guide visitors use onsite at Frick Madison.

Dalvit has held various lecture and research positions, most recently as an Associate Lecturer at The Courtauld Institute of Art, London. Additionally, he has been a guest researcher at the University of Amsterdam and a Postgraduate Teaching Assistant at University College in London. During an earlier tenure at the Frick in 2016, in a position funded by Trustee Ayesha Bulchandani, he contributed to research for the exhibitions Tiepolo in Milan: The Lost Frescoes of Palazzo Archinto (2019), Canova’s George Washington (2018), and Murillo: The Self-Portraits (2017/18). In addition, Dalvit was a research assistant at the Museo Poldi Pezzoli in Milan.

Dalvit received his Ph.D. from the Courtauld Institute, London, with a dissertation titled “Rethinking Lorenzo di Pietro, known as Vecchietta (Siena, 1410–80)”, research supported by the Arts and Humanities Research Council of the United Kingdom and the Garfield Weston Foundation. He earned his B.A. in Humanities from the Università degli Studi, Milan, and his M.A. in History of Art, also from the Courtauld. Vecchietta, in addition to being the subject of Dalvit’s dissertation, has been the focus of many of his articles, for which he was awarded a Francis Haskell Memorial Scholarship. Dalvit’s numerous other publications — on topics spanning the fifteenth through the twentieth century, and including the collecting of antiquities — have (or will soon) appear as book or catalogue essays as well as articles and reviews in The Burlington Magazine, the Journal of the Warburg and Courtauld Institutes, Renaissance Studies, and Prospettiva, among others. Together with a team of international scholars, he is currently working on a critical edition and English translation of Lorenzo Ghiberti’s Commentarii.

Photo of The Frick Collection provided.