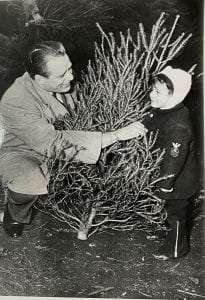 This would be the beginning of a joint venture with her third child Elliott to turn a profit from the estate lands of Franklin Delano Roosevelt.

Franklin D. Roosevelt died on April 12, 1945, in Warm Spring, Georgia, in what was referred to as the Little White House. In his last will and testament, F.D.R. instructed “the trustees of his legal estate” to “sell off all of the Roosevelt Estate lands to maximize financial returns.” In 1947, Eleanor purchased close to a thousand acres of land from the trustees and sold the property to Elliott, including her beloved Val-Kill. The sale included a stipulation that she retain life tenancy. Together, Elliott and his mother created Val-Kill Farms, with Eleanor acting more as a silent partner.

Eleanor continued to live in her cottage that at one time had been the Val-Kill Industries factory. Elliot and his actor wife, Faye Emerson, moved into Top Cottage, about a mile from his mother’s home. Franklin Roosevelt had built Top Cottage atop Dutchess Hill from 1938 to 1939. F.D.R. hoped it would become a retreat from the constant visitors arriving at Springwood, the Roosevelt estate’s main house.

Eventually, Val-Kill Farm sold eggs, milk, poultry, pork, and beef. Elliott hoped to make an initial profit by selling some of the 450,000 Christmas trees planted by F.D.R. beginning in 1933. They were planted east of Violet Avenue and included Norway Spruce, Douglas Fir, and other Christmas tree varieties. Elliott believed they could cut down roughly 50,000 trees per year. He set his sights on doubling the operation to 900,000 trees in the future.

At Christmas 1947 the trees planted by F.D.R. were mature and ready to be sold. Elliott started selling the trees locally but he angered local tree merchants by charging only a dollar each, undercutting them. Roosevelt said that selling his trees at such a low price was to “make Christians out of tree dealers.” In response, some tree dealers began referring to Eliott’s trees as “early needle-droppers and not really Christmas trees.” A few took to calling them “skunk spruce,” claiming they didn’t even smell like Christmas trees should.

Elliott was unphased by the allegations against him, claiming that tree dealers were charging as much as $35 in the city of New York, while the wholesale price was substantially less, just 65 cents for his own trees he claimed. In the 1947 season, Val-Kill Farms sold 30,000 trees. Roosevelt expanded their sales locations for 1948, and raised his prices to $1.75 for up to a seven-foot tree, and $1.95 for those taller. He estimated that he would sell about 50,000 trees. Elliott sold his trees in Harlem, Greenwich Village, and downtown Manhattan, and also in Poughkeepsie and other upstate locations.

Christmas trees turned out to be the only profitable part of the business for Val-Kill Farms. Some accused Elliott Roosevelt of lacking a keen mind for business. Lisa Nowak, in a Cultural Landscape Report for Eleanor Roosevelt National Historic Site, has written that “signs of Elliott’s mismanagement of the farm became evident through his handling of the Christmas tree operation.” Elliott entered into a contract with Grand Union supermarkets to sell his Christmas trees exclusively. The deal fell through, and Val-Kill Farms was left with a considerable quantity of cut trees that were now useless. Roosevelt was forced to burn them.

Eleanor and Elliott did their best to hold on to their dream of turning a profit on their Hyde Park lands. By 1952 however, it was clear that the enterprise was a losing proposition, as Elliott began “to lose enthusiasm for the whole venture,” according to Nowak.  John Roosevelt, Elliot’s brother, moved his family into Val-Kill Cottage next to his mother’s home in 1951. The two brothers did not get along. Elliott, in April 1952, sold Top Cottage, much to the dismay of Eleanor, who learned of the sale after the fact. It was sold to William H. Kay, Jr., who intended on developing the land. (John Roosevelt re-purchased the Val-Kill lands, including those lands and homes of his mother).

Elliott and his wife divorced and they left Val-Kill, bringing a close the Val-Kill Farms Christmas Tree operations. Eleanor continued to live in the cottage and her son John in the smaller house on the property. She died in 1962, and John subdivided his mother’s home, making it a rental property. He eventually held an auction of the contents of the property in 1970 and sold the land as well as the homes to physicians who wanted to construct a nursing home. Eleanor’s house was slated to be razed in the process. It would eventually be saved at the last moment.

Photo of Elliott Roosevelt and 3 Year Old in NYC.