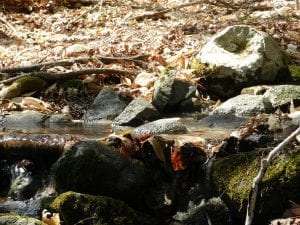 By December, foliage season is long over for us humans, but it’s peak season under the water. Last month, fallen leaves accumulated in our streams and rivers, starting a process that’s critical for the nourishment of everything from caddisflies on up the food chain to eagles and even people.

In fact, most of the Northeast stream food supply originates in the form of fallen leaves.

The bright yellow and red piles that accumulate on river rocks and fallen branches are not nearly ready for consumption by discerning invertebrates. The witch’s brew of natural chemical compounds that discourages insects from eating green leaves on trees, can be just as repellent to creatures that scavenge freshly fallen leaves under water. First, cold water must leach out those chemicals. Imagine the process as soaking and re-soaking a teabag. During this period, the leaves are also colonized by microscopic organisms. For a hungry invertebrate, the cleansed layered leaves, covered in fungi, bacteria, and algae, make a sandwich Dagwood could be proud.

If all leaves were created equal, then the river food supply would consist of a brief crop polished off by whatever ravenous insect species got there first. But of course not all tree and shrub species lose their foliage at exactly the same time, and their leaves decompose at different rates. Some are tough, leathery, and laden with toxins. Certain laurel species can release so much cyanide that entomologists have used them to kill study specimens. Other species, such as linden, are comparatively soft and become an early underwater food source. Oaks and beech trees hold onto their tough leaves late into the season and when they finally fall, they are slow to reach an edible condition.

Variability in the timing of leaf fall, and in the rates at which leaves become palatable, means that edible leaves are available for most of winter. This is also the season when much aquatic invertebrate growth occurs. A caddisfly species called Pycnopsyche gentilis acts like a chronicler of the leaf supply. In fall and early winter, its larvae cut disks from leaves, and use silk to make and line pencil-diameter cases in which they live. In early spring, as leaves become scarce, and the larvae keep growing, they add to their cases using large sand grains. This is why one can sometimes find cases with leaves at the back end and sand grains at the front.

Although fish aren’t typically leaf eaters, they nonetheless rely on the underwater foliage season. Cranefly larvae and stoneflies, fattened up on leaves, are protein-packed snacks for hungry trout, salmon, and bass. Without invertebrates, fish would go hungry. Without some knowledge of invertebrates, few anglers would know what to put on a hook to lure a spectacular brook trout.

Cleanest streams host most invertebrate species and simply counting the number of species can be the basis for an interesting study. For example, each fall, I visit forested and urban streams with Saint Michael’s College biology students. This year we found more than 20 species in Browns River, downstream from Mount Mansfield State Forest. Centennial Brook drains South Burlington neighborhoods and parking lots, and hosts fewer than half that many invertebrate species. Browns River macroinvertebrates include clean-water loving giant stoneflies, and an assortment of mayflies. I have yet to meet a Centennial Brook stonefly because the community is dominated by midges, craneflies, and a particularly tough caddisfly that makes its living by filtering particles from the water.

A view into the world of submerged invertebrates is just a bunch of leaves away. You can easily lift an intact chunk of leafy habitat from a streambed for study. Equipment can be as simple as a basin of stream water. Drop a handful of streambed leaves into the basin and observations can begin. Rinse and remove the leaves one at a time to reveal the small creatures living among them.

Declan McCabe teaches biology at Saint Michael’s College. His work with student researchers on insect communities in the Champlain Basin is funded by Vermont EPSCoR’s Grant EPS-1101317 from the National Science Foundation. The photo for this column is by John Warren. The Outside Story is assigned and edited by Northern Woodlands magazine and sponsored by the Wellborn Ecology Fund of New Hampshire Charitable Foundation.