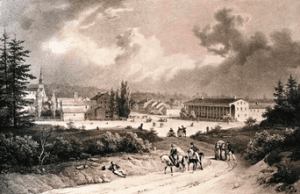 On December 1st, 1812 , Gideon Putnam, considered one of the founders of Saratoga Springs, died.

Gideon and his wife Doanda Putnam were among the community’s most influential couples. Gideon was originally from Sutton Massachusetts, while Doanda was from Connecticut. Shortly after their marriage in 1787, the two moved to Vermont and then on to the Saratoga Lake area. In 1789 they moved to what is now Saratoga Springs.

The Putnams help turn the surrounding pine forest into lumber to supply the developing village’s building materials and in 1802 the Putnams built what is considered to be the community’s first hotel – Putnam’s Tavern and Boarding House. Located on what is now Broadway, a few steps from the Congress Spring, the business was an almost immediate success with visitors coming to visit the area’s natural springs. Putnam made improvements to the Congress Spring and then later to the Columbia Spring. The Putnams also donated land for a cemetery, church and school.

Gideon published a set of guidelines for the “Proper use of the springs.” It offered rules that were intended to protect the springs from pollution, and make the spring water free. Free water at the springs set the tone for this rapidly developing resort destination. As owners of the mineral springs did not charge to drink the water, they instead made money by offering bath houses and bottling the water for distribution. Throughout the 1800s, Saratoga Springs would be among the top tourist destinations in the United States.

Putnam’s Tavern and Boarding House was such a success that Gideon and Doanda had another hotel built across Broadway. They named the new hotel Congress Hall, after the Congress Spring, which was already becoming widely known as a place to “take the waters.”

During construction of the Congress Hall, Gideon fell from the north end of the piazza and was severely injured. He lingered for many months and eventually succumbed to those injuries on December 1st, 1812. His wife and family continued to run their businesses until 1864.

Charlie Kuenzel taught at Saratoga High School for 36 years and was co-owner of Saratoga Tours LLC for 19 years. Author, lecturer and currently President of Saratoga Springs History Museum, Charlie loves Saratoga History and can be reached at charleskuenzel@hotmail.com.

Illustration of Early Image of Saratoga Springs and Congress Hall.