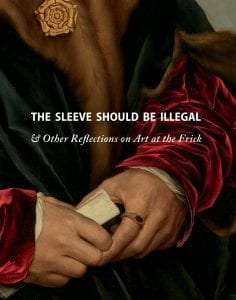 The Frick Collection in the city of New York has announced The Sleeve Should Be Illegal & Other Reflections on Art at the Frick, a new book featuring sixty-one illustrated reflections on the institution’s collection, with each contributor writing about a work of art that has personal significance, that has moved, challenged, puzzled, or inspired them. Authors from the worlds of art, music, dance, literature, film, and more share the impact visual arts have for them.

Writer Jonathan Lethem shares how he started going to the Frick as a teenager, to gaze at Hans Holbein’s portraits of Thomas Cromwell and Sir Thomas More. Dancer/choreographer Bill T. Jones writes about Chardin’s Still Life with Plums, seeing gestures between objects, considering time as reflected by light, and feeling empathy for subjects reduced to “objecthood.” With poetic verse, artist Julie Mehretu reflects on how Rembrandt’s work has offered her transformative encounters. Historian Simon Schama revels in Turner’s Mortlake Terrace: Early Summer Morning, which reminds him of his childhood growing up next to the River Thames.

The volume begins with a preface by Ian Wardropper, Anna-Maria and Stephen Kellen Director, and a foreword by writer Adam Gopnik (who also contributed an entry).

The Sleeve Should Be Illegal & Other Reflections on Art at the Frick, is set to be published January 26, 2021, and may be pre-ordered online through the Frick’s Museum Shop, or by emailing sales@frick.org. Book price is $29.95, $26.96 for members.