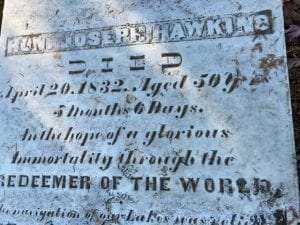 According to several genealogy and local history sources, Connecticut-born Joseph Hawkins settled in nearby Henderson around 1810 and lived there until his death.

Following the War of 1812, Hawkins had an influence on expanding Great Lakes shipping commerce. He was elected to the Congress in 1828 and championed law reforms abolishing customhouse fees, requiring duties on British/Canadian vessels on par with American ships, and fixing Canadian import tariffs at a more equitable rate. These changes helped larger American trading vessels compete with smaller ships.

At that time, Sackets Harbor’s massive wartime shipbuilding transitioned back into commercial shipbuilding. The introduction of the first steamboat on the lake at Sackets Harbor and a vigorous shipbuilding industry in ports at the eastern end of Lake Ontario, plus communities on the St. Lawrence River, created a perfect environment for Hawkins’ work supporting the lake trade. His legislation bolstering lake commerce led to a ship in Clayton, NY being named in his honor.

He served as a Jefferson County judge and “adorned the society in which he lived, by his amiable and gentlemanly deportment.” Hawkins died in Henderson on April 20, 1832 at the age of 50.

In nearby Sackets Harbor, attorney Elisha Camp and county judge Eldridge G. Merrick, both involved in lake shipping ventures, commissioned an impressive marble tablet for Hawkins’ grave in the Henderson rural Clark Cemetery. It reads “The navigation of our lakes was relieved from grievous custom house fees by his zealous efforts as Member of Congress in 1830.” (Interestingly, in later years both Camp and Merrick unsuccessfully ran for Congress.)

In 1926, a Watertown newspaper notice requested descendants of Hawkins join in a plan to place a monument on the former Congressman’s grave. Although that didn’t happen, in 1986 a Hawkins descendant living in Sackets Harbor championed the repair and relocation of the plaque to the Sackets Harbor military cemetery.

While Joseph Hawkins and his wife remain buried in Clark Cemetery, in 1987 his descendants obtained approval to move the plaque. The large marble commemorative plaque was restored and placed in the Sackets Harbor military cemetery, allowed there because of Hawkins “exceptional ability” and service to his nation as a U.S. Congressman.