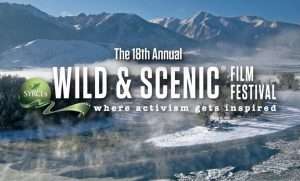 The Ausable River Association (AsRA) is set to host a virtual Wild & Scenic Film Festival On Tour on Saturday, December 5th, from 7 to 9 pm.

This event is inspired by the annual Wild & Scenic Film Festival in Nevada City, California, which is curated by the South Yuba River Citizens League and held during the third week of January.

AsRA has chosen 12 films from the festival that will be shown on a virtual platform. AsRA’s Executive Director Kelley Tucker and Donor Outreach Associate Tyler Merriam will introduce the films and their connection to the local natural world.

Feature films include: (RE)CONNECTING WILD, a story of the decade-long effort by the Nevada Department of Transportation and its partners to improve human safety by re-connecting a historic mule deer migration that crosses over U.S. highways; Sniper, a close look into the world of a conservation dogs and how they’re helping New Zealand scientists protect the critically endangered yellow-eyed penguins; and A Living River, an exploration of how organizations like Riverkeeper and the DEC use lessons learned from its past to protect the recovering ecosystem of New York’s Hudson River. Trailers can be viewed online.

Ticket revenues and donations will support the Ausable River Association and its year-round programs in the northern Adirondacks.

The virtual lobby doors will open at 6:30 pm, and the show starts at 7 pm. The films are being hosted on www.qudio.com. Tickets are $10 for students, $25 for general admission and $40 for a household. Tickets can be purchased online.