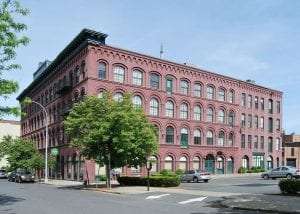 The brothers would have been looked at as techno-geeks of their time, specializing in the invention and manufacture of precision instruments.

Their factory, established in 1852, was ahead of its time. It operated by departments, with each department producing the different components, which were then assembled. Most of the other instrument companies of the day did not work like that – each workman produced each individual instrument, which took much longer and cost more. Gurley was able to still maintain their high quality, yet charge only half as much as the competition.

The W. and L.E. Gurley Building in Troy at 514 Fulton Street, in downtown Troy, was built in 1862. Originally, the ground floor held retail establishments, and the third and fourth floors were rented to other manufacturers, but the company soon expanded to take up the entire building. The handsome structure is U-shaped around a courtyard, allowing natural light into the factory spaces on both sides. A foundry was once located on the ground level on the north side.

Gurley manufactured instruments and military products for the Union Army during the Civil War. By the early 20th century, they were also making thermometers and other testing equipment. They contributed precise instrumentation for both World Wars and began manufacturing gyroscopes, sextants, star trackers and precision guidance equipment for guided missiles and space exploration during the Cold War and beyond.

Today, they are best known for their optical encoders, which are used to measure and control speed for medical instrumentation, electronics, robotics and more. They are also leaders in hydrological instruments, paper testing instruments and precision optographic instruments. The precision of their products has led to two standard units of measure called “Gurley units.”

The company was acquired by Teledon in 1968, but was later sold and is now Gurley Precision Instruments, still located on the ground floor of the Gurley Building in Troy, as well as in the building across the street. The rest of the building holds RPI’s Lighting Research Center and other school offices and labs.