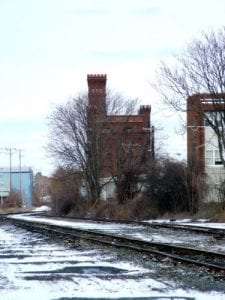 It’s at 1 Jackson Street. What I like to call the Fortress of Shoddy.

It was constructed around the turn of the last century by the United Waste Manufacturing Company, and served as a warehouse for cotton and wool shoddy. The company’s main headquarters and factory was in Cohoes.

Troy, as most people know, is famous for its 19th century detachable collar and cuffs industry. Shirts and other clothing items were however, also made in the many factories that once lined the Hudson River and it’s tributaries.

All of those cut goods produced fabric waste – these scraps, the ends of bolts, the damaged goods, plus other rags and fabrics were collected. Such waste could not just be tossed when there were methods of manufacturing it into new goods. 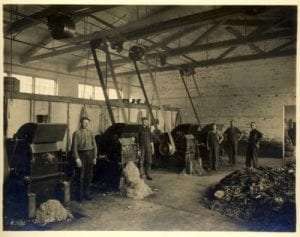 Shoddy is a cloth made from reconstituted wool and cotton rags. Shoddy was used to make blankets, workmen’s clothing, and more often, soldier’s uniforms. Many of the uniforms of the Union Army during the Civil War were made of shoddy, a practice that continued until the First World War.

Shoddy was not a superior material, it did not have the strength of either good wool or cotton, as the threads were short, not the long fibers of new goods. Not surprisingly, there was a great deal of complaining, especially during the Civil War, about the quality of the uniforms. The adjective shoddy, meaning inferior and badly made, as you can guess, comes from this fabric.

The manufacture of shoddy was a small, but lucrative business. Troy actually had two shoddy mills, the second, operated by the Troy Waste Manufacturing Company, still stands at 444 River Street (it was recently converted into apartments). 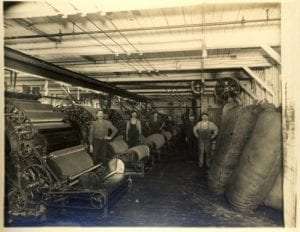 The United Waste Manufacturing Company was one of 88 shoddy mills across the country by 1909; an industry that employed over 2,000 people. By 1906, the factory in Cohoes employed over 130 workers. In addition to the factory headquarters, they had an office in this warehouse, an office in Boston, and one on Leonard Street in lower Manhattan.

Producing shoddy was hard and hazardous work for the factory workers. The rags were soaked in muriatic acid (a kind of hydrochloric acid) and then dried at temperatures above 100 degrees in a process called “carbonizing.” The whole mass was then mixed and oiled before being ground into a fibrous mass. 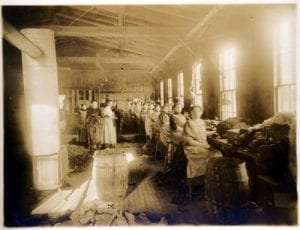 From this soup, threads were twisted out, and woven into fabric that looked like dyed wool. As can be imagined, this was toxic to workers, especially those working with the hot and dry “carbonized” rags, and respiratory conditions similar to white lung disease were common.

Fire was a danger as well. The factory had a horrific fire in 1908, when the dress of worker Ann Rumnick caught fire from machinery sparks in a baling room where the rags were bundled. The fire spread quickly in the dusty room of flammable rags forcing women to leap from the second story windows. Fortunately, there was a working sprinkler system and the fire department was able to put out the blaze.  Ann Rumnick died however, burned beyond recognition, the only fatality. The fire caused over $50,000 in damages, and probably hastened the company’s demise. 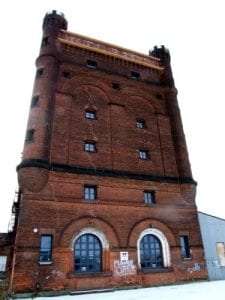 The United Waste Manufacturers Company was founded in 1899 by Troy men, including local Democratic Party boss and former US Senator who once served as Mayor of Troy Edward J. Murphy Jr.,  the company’s general manager.  His son Joseph was the treasurer, and the company’s vice president was Col. William H. Rowe Jr., who was an office holder in a number of local knitting mills, a bank director, and trustee of Syracuse University.  In 1906, the president of the company was J. J. Ryan, who along Edward Murphy, was responsible for the construction of the fortress-style warehouse. They also opened the Waste and Shoddy Exchange, where materials were bought and traded.
The building was a monumental advertising tool. It’s railroad loading dock connected to freight lines carrying goods to and from Troy and out to the rest of the world.  It’s a six-story brick building with a basement. The style is Romanesque Revival, made popular in the mid-1880s, and for decades, the favored style for large buildings that needed strong sturdy massing to achieve their functional and design objectives. 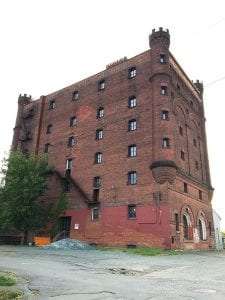 The side that faces the Hudson, the west side, is the front of the building, and has the most architectural detail. All four sides of the building are flanked with corner towers that rise from corbelled bases on the second floor, giving the building a top-heavy look.
The tower that rises from the center of the building adds to the look of a fortress. This tower held the water tank. An impressive brick cornice surrounds the building, supporting a band course with the painted sign that once read “United Waste Manufacturers Company.” The name is very faintly seen in places, and the building’s later name, “Hudson River Terminal Warehouse Co.,” can still be seen, although that too is becoming harder to read as time goes by.
Shoddy’s days as a lucrative material were coming to an end by the beginning of the 1910s. Although the idea of recycling fabric and scrap was a good one, the resulting material was just, well… shoddy. The name itself and its reputation prevented its use for anything outside a very limited market. Attempts to use it for soldier’s uniforms during the First World War were met with opposition by the military. Uniform suppliers testified before Congress that our soldiers were being asked to fight a war in winter and the least the country could do is supply them with quality woolen clothing, not shoddy. 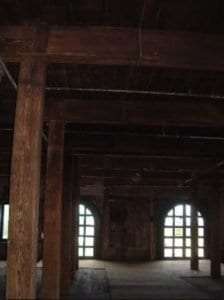 In time, United Waste Manufacturers Company let go of the building and it became the Hudson River Terminal Warehouse Company, owned by Joseph J. Murphy, who was treasurer of both United Waste and Hudson River Terminal. They were using it as a warehouse, and painted the company name prominently on the building.
Huge wooden beams and posts support the ceilings and floors on the interior of the building. The basement level consists of large arched corridors that support and spread the load of this massive building. The first floor was once office space looking out of the large arched windows.  A relatively small spiral staircase runs the height of the entire building, there is a freight elevator, and a larger interior staircase.
By the 1955, the Fortress was a storage facility for the Goldberg Building Material Company, which also owned the surrounding buildings. Over the years, other businesses occupied the building, including a furniture store.
In 2007, Maurice Margulies and Antonie Reinhard, owners of a high-end antiques business in Manhattan, now called Fortress Antiques, purchased the building. They had seen the warehouse, like most people do, from the I-787. They fell in love with it and bought it as a storage and sales facility. The building was placed on the National Register of Historic Places in 2013.