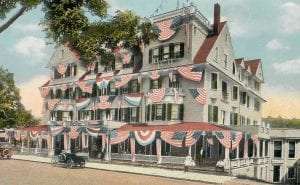 Just two years removed from his near assassination while campaigning for president in Milwaukee, and a scant few months after his ill-fated trip down the River of Doubt which had left him severely weakened, Roosevelt was touring on behalf of the Progressive Party candidate for governor of New York, Frederick M. Davenport.

It wasn’t Roosevelt’s first political visit to Sullivan County, either, as he had spoken in Narrowsburg and Callicoon—as well as Shohola, PA– in October of 1900 while campaigning for Vice President on the Republican ticket headed by William McKinley.

Local officials had expected the former president and his entourage to arrive in Liberty at 3:30 on Friday afternoon, and had arranged for him to speak from the balcony of the Liberty House hotel on North Main Street. Roosevelt was then scheduled to travel to Monticello for an appearance there, and then drive to Middletown for a speech there. Things did not proceed as planned.

A large crowd, including Mr. D.D. Hall of Claryville, a personal friend of Roosevelt’s, had gathered outside the Liberty House by 3:30, but the former president’s party had yet to arrive. After about an hour of waiting, the assembled were informed that Roosevelt had been delayed and would not arrive in Liberty until 5 p.m.

“The crowd dispersed but returned in greater numbers at the hotel at 5 o’clock,” the Liberty Register reported in its October 30, 1914 edition. “When Mr. Roosevelt and Mr. Davenport arrived in their automobile they were greeted with enthusiasm by the hundreds who bad come to see for the first time a man who once had held the greatest office in the gift of the American people.”

The Register estimated more than 2,500 people were in attendance at the Liberty stop.

The delay in the former president’s arrival was a boon for local suffragists, who took advantage of the huge gathering to promote their cause. The Register reported that Mrs. Luther C. Payne, Mrs. H.J. Sarles, Miss Jane Olcott, and Miss Adelaide Zoan were among the suffragists who worked the crowd in Liberty.

Upon Roosevelt’s arrival, he spoke privately with Hall for a moment, and was escorted into the Liberty House.

“Mr. Roosevelt was the first speaker and was presented by Dr. Ellison,” the register reported. “The Colonel’s voice was in bad shape and It was with difficulty that be made his voice carry over the big crowd. He confined his brief remarks to a sharp attack on the bosses of the two old parties.”

Davenport followed Roosevelt, and spoke for about ten minutes, after which the party departed for Monticello, where they were greeted by a similar scene. By the time the group left the County Seat bound for Middletown, they were running very late, and darkness had descended. It was not a good combination.

“One of the automobiles of the Roosevelt and Davenport campaigning party that went through Liberty last Friday, met with an accident near Hartwood, on the road between Monticello and Middletown, which delayed the party’s arrival in Middletown, where a large crowd had gathered to hear Roosevelt speak,” the Register reported in a separate story in the same edition. “In the car that figured in the accident were T.R. Steinback of New York City, Roosevelt’s secretary, and three Liberty men, Dr. L.C. Payne, G.M. Palmer, and N.C. Curry.”

The paper reported that the cars were traveling at an excessive speed for the conditions, and in the dark one of them had failed to negotiate a curve and had slid down a six-foot embankment, narrowly missing a 40-foot plunge. Fortunately, the car had remained upright, and although severely shaken up, none of the men were seriously injured.

Word had reached Middletown that Roosevelt would be late in arriving, and the rumor quickly spread that he had been injured in the crash, but his car had not been involved in the accident.

Interestingly, ten years to the day after Teddy Roosevelt’s appearance at the Liberty House, his son, Teddy Roosevelt, Jr. spoke to a crowd of 1,500 from the balcony of the Livingston Manor Lumber Company — the old Lennon House hotel — opposite the O&W Railway station in Liberty in his unsuccessful campaign for governor.

Illustration of Former president Teddy Roosevelt spoke from the first-floor balcony of the Liberty House on October 23, 1914.