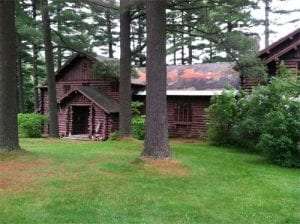 The NYS Adirondack Park Agency (APA) and Department of Environmental Conservation (DEC) are holding a joint public comment period on plans to tear down a rustic 1940s Adirondack camp at the north end of Debar Pond that is listed on the State and National Registers of Historic Places.

The camp commands a view of DeBar Pond and the adjacent mountains which frame the water. The main lodge is a rambling two-story rustic building by architect Saranac Lake architect William Distin. The site also includes a guide/caretaker house, and several barns and outbuildings.

Comments are being sought on the Draft Scope document related to proposed State Land Management Actions in the Debar Wild Forest Area including a State Land reclassification of approximately 41 acres adjacent to Debar Pond from Wild Forest to Intensive Use, the development as a Day Use Area, and the destruction of DeBar Lodge and its outbuildings. 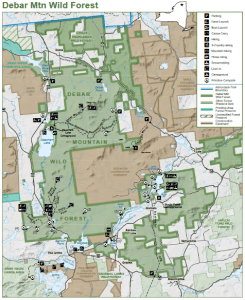 A Draft Generic Environmental Impact Statement (DGEIS) is being prepared pursuant to the State Environmental Quality Review Act to analyze the relevant areas of environmental concern resulting from the reclassification of land, in accordance with Executive Law § 816 and the Adirondack Park State Land Master Plan (APSLMP), and adoption of Unit Management Plans (UMPs) in the vicinity of Debar Mountain Wild Forest.

The included alternatives to tearing the building down such as using Debar Lodge as a storage building or ranger station.

Debar Pond Lodge is located on the end of an 1,100-acre pond named after John Debar, a Canadian trapper who visited the location on a hunting trip in 1817. It’s now part of the Debar Mountain Wild Forest, 88,300-acres of ‘Forever Wild’ NYS Forest Preserve land located in the northern Adirondack Park in the of Towns of Franklin, Brighton, Duane, Santa Clara, and Waverly, all in Franklin County.

Robert Schroeder, the son of a German brewer, began acquiring land around the pond in the 1880s, and planted more than 300 acres of hops, a very large hop plantations for the time.

After his first residence burned, Schroeder replaced it with a lavish 60-room mansion. But when his business interests collapsed, the property became derelict and went through several sales.  In 1939 the structure was razed and a residence was constructed for Mr. and Mrs. Arthur Wheeler.  Evidence of Schroeder’s earlier agricultural and domestic infrastructure appears to have been lost.

The Wheeler’s new 17-room, cedar log building was designed by William G. Distin, a native of Plattsburgh who initially worked under William Coulter, a prolific Saranac Lake architect. Distin enjoyed a productive architectural practice in the region from the early 1910s into the middle years of the century.

The main lodge survives with a high degree of physical integrity and in an intact and evocative mountain setting with a full complement of outbuildings.

Debar Lodge ranks among Distin’s major and mature-period designs, along with Camp Wonundra (ca. 1934), Eagle Nest (ca. 1937) and Camp Minnowbrook (ca. 1948). For it, Distin combined an exterior of rustic conception, predicated on the use of a log veneer, with an interior of eclectic rustic conception the plan of which hinged on the centrally placed Great Room.

It’s a notable historic location associated with Adirondack tourism in the first half of the twentieth century, and is an example of Adirondack camp design from the same period.

The property was acquired by New York State in 1979.

The Draft Scoping document provides a justification for removal of the historic struture: “The removal of Debar Lodge will also cause adverse impacts to the community character of the area, as the building has been a fixture in the local community for many decades,” document says.  “These impacts will be mitigated, in part, through … the installation of interpretive elements throughout the site. Additionally, DEC proposes to construct day-use facilities that utilize a similar design aesthetic as the current lodge, thereby minimizing the visual impact (loss of community character) caused by the lodge’s removal.”

The proposed actions in the DGEIS will include two major components:

1. The DEC proposes the adoption of UMPs for both the existing Debar Mountain Wild Forest and the proposed Debar Lodge Day Use Area. Currently, major topics under consideration for discussion in the UMPs will include:

· Removal of the Debar Lodge and other buildings located near Debar Pond. DEC will incorporate elements of the lodge complex into the design of the day use facility where possible;

· Creation of a day-use area and recreation hub on Debar Pond at the former Debar Lodge site. This area will include two pavilions, picnic tables, grills, fireplace, parking, restrooms, foot access to Debar Pond, connections to trail networks, interpretive elements related to the site’s historical past, and facilities designed to accommodate people with disabilities;

· Construction of new primitive tent sites and the closure of tent sites which are not in compliance with the APSLMP.

2. The APA proposes re-classification of approximately 41 acres of land from the Debar Mountain Wild Forest to a new day-use area, classified as Intensive Use, on the shore of Debar Pond, and changes to the APSLMP’s area descriptions.

Address all written comments related to the Draft Scope Document to: