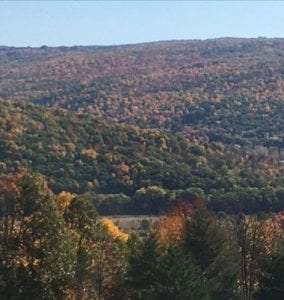 The State purchased the parcel from the Parker Trust for $171,300 utilizing federal Pittman-Robertson Act (1937) funds. To ensure that use is in compliance with the Act, the state is planning to include the land in the High Tor Wildlife Management Area in Yates County.

Signed into law by President Franklin D. Roosevelt in 1937, the Pittman-Robertson Act (officially the Federal Aid in Wildlife Restoration Act) established an 11% federal excise tax on the sale of sporting arms, ammunition, and archery equipment, and 10% tax on handguns. Half of the excise tax on handguns and archery equipment is used for hunter education and target ranges.  The funds pay for restoration, land acquisition, wildlife habitat management, and wildlife-related recreation programs.

F.D.R. environmental legacy has only recently begun to be highlighted by historians. As governor of New York, F.D.R. cited the benefits of forests during a radio address on March 31, 1930. “They protect the head waters of our rivers and streams, they prevent the too rapid run-off of rain and melting snow and tend to equalize the flow of streams. They return to the land more than they take from it and maintain its fertility.”

In 1931, he vocally supported the 1931 Hewitt Reforestation Amendment to the New York Constitution which resulted in planting tree seedlings on thousands of acres of with depleted soils and significant erosion.

Because it would expand logging and tree plantations near the then much smaller Adirondack Park, the Hewitt Amendment was opposed by New York State conservationists such as John Apperson, who pressured Roosevelt to instead expand the Adirondack Park by about 1.5 million acres. Roosevelt supported both efforts, resulting in creation of State Forests outside of the Adirondack and Catskill Parks, which now total about a million acres, including The High Tor Wildlife Management Area. (You can read about this in a recent article by David Gibson here).

Successful at the state level, TERA became a model for the Civilian Conservation Corps. The C.C.C. was created in 1933, after F.D.R. was elected President, to “conserve our precious natural resources” and relieve the poverty and unemployment. During its nine years, the C.C.C. employed more than 3 million men.

C.C.C. Camps were set up in many New York towns, state parks, and forests. Workers built trails, roads, campsites and dams, stocked fish, built and maintained fire tower observer’s cabins and telephone lines, fought fires, and planted millions of trees. The C.C.C. disbanded in 1942 due to the need for men in the Second World War.

In 1933, F.D.R. expanded the National Park Service’s mission to include not only parks and monuments but also national cemeteries, national memorials, and national military parks (he also added the parks in Washington, D.C.).  The reorganization paved the way for inclusion of historic sites such as the Vanderbilt Mansion and Saratoga Battlefield and National Cemetery.  F.D.R. was responsible for adding over one-quarter of the 411 areas in today’s National Park Service system.

The Most Recent State Acquisition

DEC previously identified the land as a regional conservation priority and the purchase is hoped to enhance wildlife habitat, strengthen regional watershed protections, and increase access for wildlife-related recreational opportunities such as hunting, trapping, fishing, and wildlife viewing.

The High Tor Wildlife Management Area to which the new parcel is being added, consists of approximately 6,800 acres of numerous ecological habitats with many steep wooded hills, gullies, eroded cliffs, and wetlands.

For more information about High Tor, go to DEC’s website.