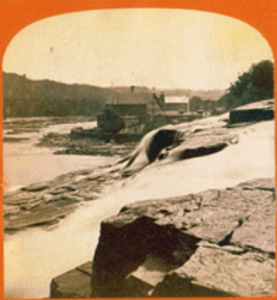 A fatal mistake on Sunday evening, November 7th, 1869 resulted in the death of Thomas Brown, agent and superintendent of the Palmer Falls Water Power Company and Woolen Factory in Corinth.

Brown, a Scottish immigrant, had come to the area from Niagara Falls as a speculator with plans to improve the water flow on the Hudson River at Palmer Falls. He hoped to sell or lease rights to the abundant waterpower with property along the Hudson to manufacturers. A canal was added to provide hydropower to an edge tool factory operated by Brown in 1860.

When the Civil War broke out, he found it difficult to procure the iron because of rising prices as well as local labor shortages. The edge tool factory closed and by 1866 he had a woolen factory in operation. The wool would be processed at the mill from the raw fleece brought in by local farmers then carded, spun, wove, and finally washed, dried, and dyed into woolen and flannel fabric. The mill employed about 30 people.

On the evening of November 7, 1869 at about 6 p.m. Thomas Brown walked from his nearby home down to the mill. He found the door unfastened and went inside to check on the premises. He came back out, was seen by the night watchman who called to him twice, but Thomas appeared not to hear him. The night watchman could not identify the man in the dark and followed Mr. Brown back into the mill. A warning shot was fired by the watchman to scare the intruder. A cry went out “Oh, I am shot” and the night watchman recognized the voice of Thomas Brown.

A court of inquest was held the following day at the hotel of Joseph Bosworth near the mill. Alfred Angell, a county coroner and nine local jurors heard testimony from several people.

Dr. Houghton, a local physician, who was summoned to the mill soon after the shooting was the first to speak. He testified that Thomas Brown had a wound near the center of his chest and died of profuse internal hemorrhaging.

The wife of the night watchman, Linnie Tuthill, told the court she had looked out her window and saw a shadow of a man entering the mill. She awoke her husband.

Clarence Tuthill, the 23-year-old night watchman, testified he went out with his revolver and dog to investigate. He called twice to the man to stop, but there was no response. He followed the man into the mill and thought he heard a click from a pistol, so he fired his revolver. When the man cried out, he recognized Mr. Brown and summoned help.

Others testified Thomas Brown was in the habit of visiting the mill on Sunday evenings. Apparently, he had removed some cloth from the outside racks and took it inside. The next morning Brown’s cloak and cane were found next to the cloth inside the building. The jurors and coroner rendered a verdict that Thomas Brown was shot and killed by Clarence Tuthill on the evening of November 7, 1869. They strongly censored Tuthill “as being hasty and imprudent, but find the shooting was not intentional”.

Thomas Brown was 43 years old at his death. He left a wife and six children. He was buried at the old burial ground on upper Main Street, currently the site of the Main Street School, but his body was removed with others to the Corinth Rural Cemetery in October 1897. News of the tragic shooting was reported in newspapers from Maine to Pennsylvania. Clarence Tuthill and his wife moved to the Troy area. He died in 1938 and is buried in Waterford, NY.

The woolen mill burned soon after and was rebuilt and used by the Hudson River Pulp and Paper Company for the manufacture of pulp-based paper. In 1898 this was one of the mills that joined with more than a dozen other paper mills to become International Paper.

Rachel Clothier is the historian for the Town of Corinth. She has been active with the Corinth Museum, 609 Palmer Ave, for over 38 years. She is always on the lookout for stories about Corinth’s past. More photos of the Corinth area can be found at Facebook/Corinth Museum. Rachel can be reached at clothierfarm@gmail.com.

Photo of Brown Woolen Mill as seen from Palmer Falls circa 1865.