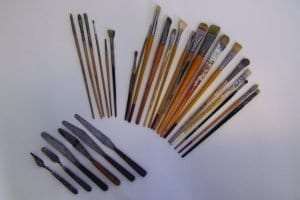 The Sembrich in Bolton on Lake George has received a donation of paintbrushes and palate knives used by American Painter Johann Berthelsen.

The brushes were originally a gift to the artist from Marcella Sembrich, who originally presented them to Berthelsen at the time that he was working on a series of paintings that she commissioned. 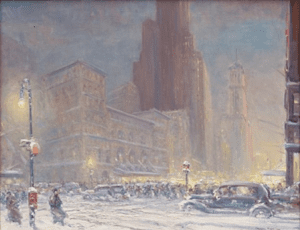 Seven of twelve paintings from the original commission are still in The Sembrich’s collection, including the well-known view of the original Metropolitan Opera House on 39th and Broadway.

Sembrich met Johann Berthelsen while he was a student at the Chicago Musical College and encouraged his career in opera. She followed his progress as he moved from performing to his tenure as head of the Vocal Music Department at the Indianapolis Conservatory and later as a prominent voice teacher in New York.

When Berthelsen turned to his artistic talents as a painter during the Great Depression, Sembrich  commissioned a series of paintings depicting themes and events that were important to her life. At that time, Madame Sembrich, herself an amateur painter, presented the brushes and palette knives to him.

Illustrations, from above: paintbrushes and palate knives used by Johann Berthelsen; and Met Opera House by Berthelsen, provided.