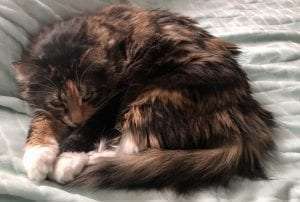 All animals need sleep of some kind. Reptiles, birds, bees – even nematodes, reportedly – require periodic bouts of unconsciousness, though I imagine it’s hard to tell what level of consciousness a nematode has when it’s awake. In a June 25, 2016 BBC report, University of Wisconsin sleep biologist Barrett Klein says that “… sleep is shared across all animals. There’s no universally-accepted exception.”

Among mammals, sleep requirements vary dramatically. Most health experts recommend 7 to 8 hours of sleep each night for humans, but horses only need two hours of shuteye. On average, cats doze for 12.5 hours each day, which I assume includes catnaps. Giraffes are only off the clock 4.5 hours out of 24, while platypuses are out cold for 14 hours. And the giant armadillo, which must not have a big social life, snoozes 18.1 hours daily.

We may not fully understand all the benefits of sleep, but an article published by the National Center for Biotechnology Information (Purves D, Augustine GJ, Fitzpatrick D, et al., editors) states “Whatever the reasons for sleeping, in mammals it is evidently necessary for survival. For instance, rats completely deprived of sleep die in a few weeks.”

In the extreme, the same may be true for us. Writing for Psychology Today on Dec 15, 2014, Dr. Kelley Bulkeley says “The cumulative effects of sleep deprivation go beyond the loss of this or that specific function to a precipitous, ultimately fatal decline in all functions.” There you have it, scientific support for my new motto – ‘Sleep to Live, Live to Sleep.”

The fact that that deep (slow-wave) sleep is important for humans in order to consolidate memories is well-documented. Turns out that honeybees need their sleep for a similar reason. The miraculous, highly choreographed interpretive dance by which worker bees report the location of the best flowers to their pals completely falls apart when these ladies (all the important bee work is done by females, just as in our species) are sleepy. I find it amazing, though very cool, that folks think to investigate stuff like this.

Just as incredible is the research being done on whales and porpoises starting in the late 1980s. It seems the dolphins at the South Carolina Aquarium in Charleston, S.C. do more than jump through hoops; they let biologists glue electroencephalogram (EEG) electrodes to their heads. Regardless of the season, these mammals (and many other cetaceans, though the sperm whale may be an exception) are half-asleep about a third of their lives. For bottlenose dolphins, the figure is 33.4% as measured by EEG.

This is a solution to the problem posed by being a marine animal which needs to snooze underwater, but which can only breathe at the surface. By shutting down half their brain at a time, one hemisphere gets a rest while the other half is able to swim and remain watchful for predators. When both halves satisfy their sleep requirements, the brain comes to full alertness. There are anomalies at times: a 2005 report from livescience.com indicated that newborn killer whales and dolphins may not sleep for their first few months of life. There was no mention of how they got the EEG readings to prove this, however.

Birds also have half a mind to take a nap. Sleep requirements vary widely among different species, but birds are endowed with the same kind of unihemispheric superpowers as dolphins. One side of the brain keeps half an eye out (so to speak) for trouble while the opposite hemisphere dozes. Perhaps it dreams about how the other half lives, because birds experience dream-filled rapid-eye movement or REM sleep as we do.

Whether migratory birds, which sometimes fly nonstop for days, exhibit this half-on, half-off brain pattern while airborne is not known. Though lacking citation, a Wikipedia entry on the topic caught my eye: “Theoretically, certain types of sleep could be possible while [migratory] flying, but technical difficulties preclude the recording of brain activity in birds while they are flying.” I hope the humor was intentional.

Quality of sleep – having an appropriate “sleep architecture” that cycles through deep, light, and REM phases – is as important as quantity of sleep for all animals. I’ve heard that even if a patient has needed to be sedated for a number of days, they regain consciousness sleep-deprived. Along those lines, hibernators actually rouse themselves from time to time in order to get good quality sleep. Fortunately for the researchers, the study which documented this involved chipmunks rather than grizzly bears.

The dwindling hours of daylight in autumn trigger our brains to produce more melatonin, a hormone which causes sleepiness. If you feel only half-awake more than you’d prefer at this time of year, it’s likely due to increased melatonin levels. Exercise, a healthy diet, and a regular, if not regimented, sleep schedule will help fight the lethargy which often starts to creep in at this time of year.

Surprisingly, the extra hour gained when clocks are set back each fall isn’t necessarily good for us. The website harvardhealth.edu admonishes that “Getting more sleep than you need may not leave you refreshed and energized…any significant deviation from normal sleep patterns can upset the body’s rhythms and increase daytime fatigue. Figure out how many hours of sleep are right for you and then stick with it — even on weekends, vacations, and holidays.”

Whether your career involves marathon swimming, interpretive dancing, or other things, get some good rest tonight. Even if you have half a mind to stay up and check your phone.

Photo of cat by Greg Dower.