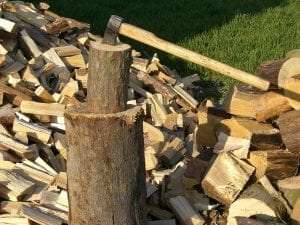 Unfortunately, many of us who heat with wood are not enlightened as to how much extra wood we carry because we’re needlessly boiling water inside our woodstoves all winter. In fact, if your firewood is not adequately dry, it could cost you $200 to $600 annually just to send steam up the chimney.

I don’t mind paying to boil water if the outcome is something like coffee, or a spaghetti dinner. But I hate the idea of shelling out hard-earned cash to boil water for no good reason. Every drop of moisture in our firewood costs us money as well as pointless additional effort. Improperly cured wood gives off less heat, so we have to carry and burn lots more of it compared to dry wood.

Moist wood also produces more creosote. The risk of a chimney fire increases with wood moisture content, so it’s important to wring the water out of firewood before we use it.

I’m guilty of wasteful water-boiling, too. Let’s face it; we all have too many pressing things that need to get done in a given day. In the spring it seems like there’s a world of time to get the firewood split, stacked and covered. But it’s all too easy to put it off until tomorrow. And the next tomorrow, and on down the line.

I was curious as to how much we pay to use our wood stoves or furnaces as drying kilns. Of course this can vary, because not all firewood is created equal. Heat value of heating fuel is expressed in terms of million British thermal units, or mBTUs. In case you’re running low on trivia, one BTU is the energy it takes to heat a pound of water one degree Fahrenheit.

Firewood mBTU charts never agree exactly, because the heat value of a soft maple, as an example, will differ depending on the conditions in which the tree was grown. In northern NY state, hard or sugar maple is considered by many to be the gold standard of firewood. When dry, it contains about 24 mBTUs per full cord. Another detail for when you’re short on random facts is that a full cord is 128 cubic feet, and contains three standard 16” long face cords.

For the sake of argument let’s say it takes twelve face cords of apple, one of the best firewood species in terms of heat value per volume, to heat a North Country house for the winter. Never mind that nobody will ever cut that much apple – it just makes a good illustration. At 26.5 mBTUs per dry cord, apple has hard maple beat hands-down.

By contrast, dry basswood has 13.5 mBTUs per cord and poplar has about 14. Black locust, recently classified as an invasive species in NY State, is also great fuel wood, rated at 27 mBTUs. The best North American hardwood I know of is Osage orange, native to the Midwest. It comes in at 33 mBTUs/cord.

We are thrilled with our load of apple wood, of course, as it costs the same as white ash but is about 15% more valuable. I’ll assume that cut, split and delivered, this will run $65.00 per face cord. Our twelve face cords mean an annual heating bill of $780.00, which incidentally is pretty cheap.

Here’s the rub: compared to its dry weight, apple is about 77% water. If we don’t get our precious wood dry before winter, it will only give 18.5 mBTUs per full cord. We’ll have to chuck a lot more wood in the stove, and will have to clean the chimney more often. And anyone living downwind from us will eat a lot more smoke.

The bottom line is that if that precious apple wood isn’t dried, 8 million BTUs per full cord will be used to boil water. This represents a 27 % financial loss, costing us about $210.00 to boil water. And if we’re handling unseasoned wood, by springtime we will have lifted and lugged over 4,000 pounds of water for nothing. Seasoned wood is easier on the back because it’s enlightened, you might say.

The key to drying firewood is to cut and split it early, preferably 12 months in advance of burning, and stack it so that it has good air circulation. Protecting it from the weather is a capital idea, obviously. But woodpiles should be covered on the top only. Never cover the sides of a woodpile.

To burn reasonably clean, firewood has to have less than 25% moisture. Wood is hygroscopic, that is it absorbs moisture from the air depending on the humidity. However, even in extremely humid conditions, wood that has been covered for six months or more will not have over 20% moisture.

If you’re curious about the actual moisture content of your firewood, hand-held moisture meters are available in the $25 to $50 price range at many hardware stores. It’s a small investment for peace of mind. Also, some rural libraries have these tools available to borrow for the day.

We should do what we can to use fuel wood for heating the house, not for randomly boiling water. Let’s reserve that for coffee and tea.