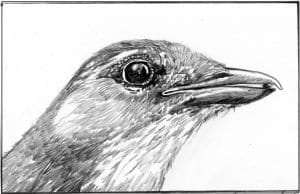 We know that squirrels make the most of fall’s plenty by hoarding nuts for the winter, but the fact that birds also store, or cache, food goes largely unappreciated.

Through clever observation and experiments, biologists have found that food caching (from the French cacher, “to hide”) has developed to a high art in some birds.

Take the chickadee, for instance. Chickadees put tens of thousands of food items a year into short-term storage. They usually retrieve and eat the food in the space of several days. Each food item is cached in a different place to make it difficult for thieves to steal all the food at once. When hiding a new item, they remember their previous storage sites and avoid placing caches too close together.

Chickadees remember each hiding place for around a month, even though they may be scattered widely across a bird’s territory. Research shows they use visual cues to navigate back to each of their cache sites by a combination of larger landscape features, particularly verticals, and use of the sun as compass. Smaller local details are not as critical, probably because these often change in a forest. When retrieving food, they remember which sites have been emptied, either by them or by robbers, to avoid fruitless searching.

How does a tiny bird have such brain power?

Chickadees begin to store food at the onset of fall, when seeds become abundant. At the same time, the region of the brain that handles spatial memory (part of the hippocampus) starts to grow in size by producing new brain cells to handle the huge amount of cache data. It continues to grow as more food is cached. Come spring, reliance on food stores drops, caching dwindles, and the brain area shrinks. Brain cells use a lot of energy, so to conserve resources the extra cells last only as long as they are needed. Brain growth is tied to food availability, since captive chickadees that receive plentiful food year-round do not undergo seasonal brain changes.

Birds in the corvid family – crows, ravens, jays, and magpies – are capable not only of prodigious memorization of food cache locations, but also what type of food was cached and when. They even learn that food can go bad and then apply that knowledge to their stores. In one study western scrub jays were allowed to learn that grubs were perishable whereas peanuts were long-lasting. They were then given grubs and peanuts to cache. If they had free access to their stores, they ate the grubs first, before they went bad. If the jays were prevented from reaching their stores until after the grubs had spoiled, they went only to the cached peanuts and did not visit the grub caches.

And astonishingly, birds can re-evaluate their food caches on the fly. Magpies were given blue and red food pellets to hide, and then were confined. The researchers then replaced the cached blue pellets with blue beads – but only if the birds were released to retrieve the food later that day. If the magpies were not allowed to retrieve caches until the next day, then red pellets were exchanged for red beads. After experiencing that blue pellets became inedible the same day and red ones the following day, the magpies sought out only red pellets if they were released to retrieve caches on the same day, and only blue pellets if retrieving food on the following day. Evidently they remembered not only where they hid food, but what it was and when they hid it.

Outwitting those who would steal food stores also requires intelligence. Chickadees understand that some birds steal food but not others. Potential thieves include other chickadees and also nuthatches, another species that caches food. When a chickadee hides food in the presence of another chickadee or a nuthatch, it chooses to do so behind cover so the potential robber can’t see the hiding location. But if a non-robbing junco is present, a chickadee caches food openly.

Perhaps the most notable caching behavior recorded so far is in scrub jays. If they cache food while another jay is watching, they return quickly and move the food to another hiding place. But interestingly, only jays that had learned to pilfer another jay’s stores behaved this way. Jays that had never robbed another did not move their caches. They say it takes a thief to know a thief; jays seem able to predict the behavior of another by extrapolating from their own behavior, an aptitude previously thought to exist only in humans. And the discriminating jays don’t move food that was cached while they were being watched by their mate, with whom they share food.

These feats of learning and reasoning belie the conventional “bird brain” notion that dismisses birds as having finely tuned instincts but otherwise being rather stupid. They also illustrate the importance of food caching. The impressive ability to memorize caches and thwart thieves has spread through these species simply because it allows for better survival in the wild, where the food supply fluctuates between feast and famine.

Li Shen is an adjunct professor at the Dartmouth Medical School and the chair of the Thetford, Vermont, Conservation Commission. The illustration for this column was drawn by Adelaide Tyrol. The Outside Story is assigned and edited by Northern Woodlands magazine and sponsored by the Wellborn Ecology Fund of New Hampshire Charitable Foundation.