Philip Schuyler was the father of Eliza Hamilton, Hamilton’s wife, and one of the largest slaveholders in New York State when the new nation was founded.

In her report, Serfilippi disputes the version of Hamilton as an opponent of slavery presented in the Broadway musical, which was based on a biography of Hamilton by Ron Chernow.

Serfilippi argues that Hamilton took different positions on slavery based on political expediency, had no moral opposition to the practice, in his work acted as a slave trader, and used enslaved Africans he and his wife owned or rented as household servants. Serfilippi’s report is based on careful study or letters, datebooks, and ledgers deposited at the Schuyler Mansion and digitized by the Library of Congress. 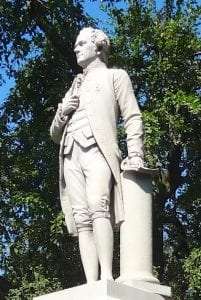 Hamilton, along with John Jay and Aaron Burr, was a founder of the New York Manumission Society in 1785. The society supported gradual manumission rather than immediate emancipation of enslaved Africans in New York State. Gradual manumission, which became law in 1799, meant that enslaved Africans would continue to work for slave owners until 1827, essentially working off their value before being freed.

In 1784, a year before he helped establish the New York Manumission Society, Hamilton brokered the purchase of an enslaved teenage girl named Peggy for Malachi Treat, the Surgeon General for the American forces during the Revolutionary War. Hamilton made the actual purchase and then resold her to Treat. According to Serfilippi’s research, Hamilton repeatedly acted as a middleman for the purchase of enslaved Africans by his brother-in-law John Barker Church and Angelica Schuyler Church, his wife’s sister.

In addition to serving as a middleman for family members who purchased enslaved Africans, Hamilton provided legal advice to prominent clients, including Lewis Ogden and Jean Juhel on slave purchases in a period when New York was implementing gradual manumission and the United States was preparing to outlaw the trans-Atlantic slave trade, and represented other clients accused of being involved in the slave trade.

Serfilippi concludes “We may never know what became of the people the Hamiltons enslaved, but we know they existed. Alexander Hamilton’s cash books offer a history of his connections to and relationship with the institution of slavery. He was trusted by legal clients to know the ins and outs of the slave trade for certain cases. He was selected by friends and family to act as a financier and to purchase enslaved people for them. He purchased multiple enslaved people for his own family and did not leave instructions for them to be freed upon his death.” She recommends that “In light of these primary sources, the majority of which are in Hamilton’s own hand, it is vital that the myth of Hamilton as the “Abolitionist Founding Father” end.”

You can read Serfilippi’s study here.

Illustrations, from above: Watercolor drawing of the Schuyler Mansion made by Philip Hooker in 1818; Hamilton statue in New York’s Central park; and Hamilton grave at Trinity Church in Manhattan.