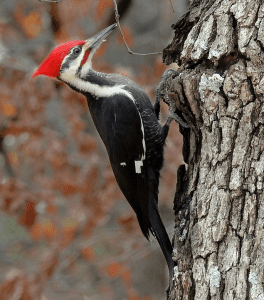 If you get bad news about one of your trees, kindly don’t shoot the messenger. Even if – especially if – they vandalize that very tree. It could save your life to heed their warning.

Although it’s captivating to watch a big prehistoric-looking woodpecker chisel away at a rotten snag in the forest, the same performance loses its charm when it jack-hammers a hole in your perfectly sound tree.

The thing is, no matter how healthy that tree may appear, it is definitely not sound, and may in fact be quite dangerous. Your “vandal” is alerting you to this fact by installing windows in the tree trunk.

Native to the eastern US, southeastern Canada, and a belt of Canadian boreal forest stretching to the Pacific coast, the pileated woodpecker (Dryocopus pileatus) is easy to recognize. Its prominent red crest (or pileatus, if you speak Latin) is a real attention-getter, but its size sets it apart as well. Assuming the ivory-billed woodpecker is extinct, our pileated is the largest woodpecker in North America, measuring 16 to19 inches (40-49 cm) long, with a 26- to 30-inch (66-75 cm) wingspan. Its body is mostly black, with a strip of white down the throat. Males and females are both red-crested, but the male has an extra red stripe on the sides of its head. Patches of white are also visible as it flies in its distinctive undulating pattern.

Pileated woodpeckers excavate large cavities in dead trees in which to nest – so large that the tree sometimes ends up collapsing at the nest site. They also “mine” dead trees for larvae, or grubs, of wood-boring beetles. But these birds have a special appetite for carpenter ants, which is what sometimes lands them in backyards and other landscape settings. As unsettling as it is to see wood chips raining down from your tree, that is the least of its problems.

It’s a lot of work for these birds to chop holes in wood using only their lips, so you can bet there’s a real good reason for such activity. Their eyes are on a succulent prize in the middle of that hard outer shell, a tasty carpenter-ant soft center. It’s sort of the bird equivalent of a lollipop with a chewy center.

Once we realize that a pileated only hacks into a live tree if the trunk is packed with ants, it’s logical to figure that the next step is to kill those ants. The trouble is, that won’t help at all. The ants are not the issue either.

In spite of their name, carpenter ants are unable to engage in woodworking projects with fresh, solid wood. It’s possible they are jealous of termites, which can do actual carpentry. Carpenter ants are so named (I’m pretty sure, anyway) because if they are in your house, you need a carpenter, as opposed to an exterminator. Undoubtedly there is a crumbling sill plate, joist, or other piece of rotten lumber in need of replacement. Carpenter ants can only infest damp, rotted wood. True story. Rot comes first, and ants come second.

Pileated woodpeckers aren’t after your trees; they’re in pursuit of an ant colony. In turn, those ants aren’t ruining your tree, but are signaling the presence of advanced decay inside it. Using insecticide on ants inside a tree will put all sorts of birds at risk, not to mention pets and children, and is unlikely to completely eradicate the colony anyway. Most importantly, it will do nothing to slow the inexorable march of decay throughout your tree.

Working for a tree service in Saranac Lake in the Adirondack Park years ago, I spent one Sunday removing the trunk of a massive white pine from the attic of a beautiful historic house. The pine had snapped off about thirty feet up and landed perpendicular to the roofline, crushing the roof and damaging bedrooms below. The cause of trunk failure was a column of decay due to improper (flush-cut) pruning years before. Ants were present inside this section, but were a symptom, not the problem. If only a pileated woodpecker had alerted the homeowner to the situation, disaster might have been averted.

If you ever see pileated woodpeckers “vandalizing” one of your landscape trees, be aware that decay lurks within it. Have an arborist evaluate it for mechanical integrity and overall health. Heartwood decay does not always mean a tree is doomed, but if it’s going to come down no matter what, most people would rather it happen in a controlled fashion. If you want to thank the messengers, I’m not aware of any carpenter-ant dispensers, but pileated woodpeckers occasionally visit suet feeders.