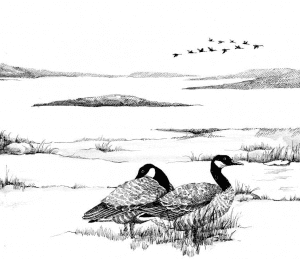 A large V of Canada geese flying noisily over my head – and traveling north, rather than south – got me wondering about the ins and outs of fall migration. Shouldn’t these big birds be flying to warmer climes this time of year?

Why do they travel in that V-formation, anyway?

It turns out the answers aren’t simple. Canada geese (Branta canadensis) live throughout the continental United States and across their namesake country. These loud honkers are easily identified by their size – up to 20 pounds, with a wingspan up to five feet – and their characteristic white chinstrap markings across black heads and necks.

There are myriad subspecies of Canada geese (not “Canadian,” please), but wildlife biologists tend to identify them by where they go, or … where they stay. Two populations fly over the northern forest annually, heading north in the spring and south in the fall, but there is also a large resident population. The latter is considered by many people to be as aggravating as party guests who eat and drink more than their fair share, make a huge mess, and just won’t leave, no matter how many hints are dropped. 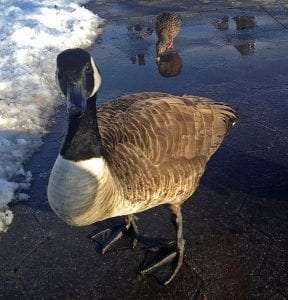 These resident geese are descended from captive populations. Until the 1930s, waterfowl hunters often kept tame flocks of geese and ducks to act as live decoys. When that practice was outlawed in 1935, some of these geese, which had no natural inclination to migrate, ended up living as wild birds.

“These geese were raised in private captive farms, so they don’t have the urge to migrate,” said Jessica Carloni, the waterfowl project leader for the New Hampshire Fish and Game Department. “That is how the resident population was created, and it’s believed to be made up of a mix of subspecies.”

Resident geese do move around, following food sources and transitioning seasonally to different bodies of water. But they don’t move far. The birds I see returning each spring to a local pond in northern New Hampshire, for example, likely only move as far south as is absolutely necessary, probably to southern New Hampshire or into Massachusetts.

Still, those places are south of here. So why do I see geese flying the “wrong” way?

“They’re probably just going back and forth to food sources,” said Pam Hunt, avian conservation biologist for New Hampshire Audubon. “Often they’re following rivers, and rivers tend to run north-to- south. That’s where the food is. This time of year, a lot of the food they eat is going to be in wetlands, or in big fields where farmers have recently cut the cow corn.”

Canada geese are large and generally have plenty of fat reserves to survive harsh winters. Resident birds, without that inherent instinct to migrate, have little reason to vacate come winter. As Hunt puts it, “It’s not about temperature. It’s about food.” In our human-altered landscapes of agricultural fields and golf courses, there tend to be more opportunities for cold weather snacking than there would naturally be, and long-distance flying is expensive in terms of both energy expended and risk of predation.

As to the migrating geese, there are two populations you’re likely to see flying south this time of year: the Atlantic population (mainly B.c. interior) and the North Atlantic population (mainly B.c. canadensis). The former nests in northeastern Canada on the Ungava Bay and follows the Connecticut River some 1,600 miles to wintering grounds in the Chesapeake Bay. The latter breeds in Labrador and Newfoundland, then flies along the coast to New Hampshire’s Great Bay, or perhaps as far south as New Jersey.

Generally those large groups of geese honking and flying – in whichever direction – this time of year are family units, or collections of several families. And they almost always fly in a V-formation. If you’ve ever watched a cycling race and seen the peloton of competitors drafting and taking turns at the lead, you’ll understand the reason behind the characteristic flight shape: it’s all about saving energy.

“Each bird flies slightly higher than the bird in front, which creates an updraft that provides lift to the bird behind it,” said Carloni. “Another advantage is that it enables visual communication among the flock. Canada geese have a blind spot at the back of their heads, so if the angle is right, they can see every bird in the flock, even the ones behind.”

It’s like a rearview mirror. The geese can see where they’ve been as well as where they’re going, whether it’s far away or just down the river to the next pond – or golf course.

Meghan McCarthy McPhaul is an author and freelance writer. She lives in Franconia, New Hampshire. The illustration for this column was drawn by Adelaide Tyrol. The Outside Story is assigned and edited by Northern Woodlands magazine, and sponsored by the Wellborn Ecology Fund of New Hampshire Charitable Foundation. Photo of Canada goose courtesy Wikimedia user SteveStrummer.