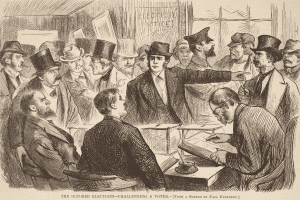 “The one pleasant thing about it, when the cruel suspense is over, they’ll be less lying in the newspapers and less personal defamation in the streets,” the Sentinel quipped on October 29th.

Musicians were exempt from the fray.

“The same brass bands play the same tunes for both political parties. There is nothing like harmony in politics, if only in a musical way,” the Sentinel quipped on November 3rd.

In those days, neighborly kindness was expected to resume after the voting. “When the election is over and the din of politics passes away, neighbors will renew friendship with neighbors, while borrowing tea, butter and flat irons is as lively as ever,” the Sentinel quipped in the same issue.

Election Day wasn’t the only big event in November.

“The next big thing is the election, and then will come Thanksgiving. That is if our side wins.”

Three days after the election, editor J.L. McArthur was thankful, even though results of most races were not yet known.

The euphoria put the editor in a poetic mood.

“Oft expectation fails, and most oft there where most it promises. And oft it hits where hope is coldest and despair most sits.”

Ten days after the election the editor was – almost – ready to change topics.

“Many of our readers will doubtless be glad that the political war is over. We shall now devote more space to other matters which have necessarily been to a great extent neglected for the past few weeks.”

Much of editorial content in that week’s issue celebrated the end of the election.

“The pulse of humanity is nearing its normal condition again.”
“The prophets have abandoned politics and taken hold of the weather prospects for the winter.”
“Let’s all shake hands and be friends again, until the next election, anyhow.”

On December 1st, editor McArthur was still writing about the election.

Perhaps he was confused on his Old Testament history.

It was Jacob who was said to have wrestled with God.

“Job was a man who digested a considerable quantity of misery, buy he never knew the utter vexation and vanity of spirit that comes from a continuous wrestle with the late election returns.”

At West Hebron, true to the editor’s prediction, neighborly kindness once again prevailed.

“Some of our kind neighbors made some bets on our state elections, and the winning parties finding themselves in possession of quite a large quantity of very nice oysters, and being hospitably inclined, engaged Ashley Hall and gave a grand oyster supper to the inhabitants of this entire vicinity and village.”