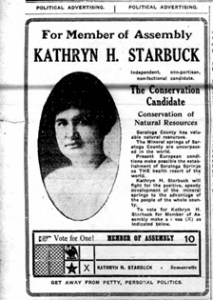 Kathryn Helene Starbuck was born in Saratoga Springs in 1887, only a few years after her father, Edgar Starbuck, had moved to town and purchased a department store on Broadway. Kathryn was a bright young girl and after graduating from Saratoga Springs High School went on to earn a degree from Vassar College in 1911.

In 1914, she became one of the first female graduates of Albany Law School and was admitted to the New York State Bar Association the following year.

During her college years she became active in the women’s suffrage movement in and around her hometown of Saratoga Springs, making speeches and helping to organize events sponsored by the New York State Suffrage Association. While trying to gain support for the 1915 New York State Suffrage Amendment, she became the Business Manager of the Saratoga Springs Woman Suffragists. Several articles refer to Starbuck as an organizer and speaker at suffrage events around the county. Although Woman Suffrage was defeated in New York in 1915, Starbuck kept fighting. In 1916 she was the “Saratoga County Assembly District Leader of the New York State Woman Suffrage Party.”

After the success of the November 1917 vote that gave women in New York the right to vote in state elections, Kathryn took up the cause of teaching women how to use their newly earned right. The headline of one article, published in The Saratogian on March 2, 1918 reads, “Mothers Urged to Vote Intelligently: Go Slow, Urges Miss Starbuck, and Make a Few Mistakes as Possible – Use the Ballot for Good of the Community.” She encouraged women to read the newspapers and discuss political articles to become informed, and also invited them to attend lectures given at the Saratoga Springs High School Auditorium for the benefit of new voter.

Kathryn decided to run for a seat in the New York State Assembly in 1918. Running as “The Conservation Candidate” on the Democratic Line, she campaigned on protecting the natural resources of Saratoga County, from mineral springs to farmer’s fields. At the time, America had entered the First World War and citizens were encouraged to conserve food whenever possible so that larger quantities could be sent to Europe in order to feed the troops. The popular phrase “Food will win the war” was used by Starbuck on some of her political ads. Another slogan on her ads read “Get Away From Petty, Personal Politics,” a plea that remains relevant today. On November 5, 1918 Kathryn Starbuck was defeated in her bid for the Assembly by Republican Candidate Clarence C. Smith who received 11,115 votes to Starbuck’s 7,994.

Though she was unsuccessful in her campaign, she continued her work in educating women on how to use their right to vote. In 1920, Kathryn became the first Chairman of the Saratoga County League of Women Voters. She became a professor of law at Skidmore College and also served as secretary of the school for several decades, in charge of public relations. An advocate for the importance of public education, she was the first female to serve as the President of the Saratoga Springs Board of Education.

Starbuck remained involved in several civic organizations, many focusing on women, for the rest of her life. She passed away on November 19th 1965.

2020 marks the 100th Anniversary of the 19th Amendment, the hard fought Amendment which allowed American women to vote.

Lauren Roberts is the Saratoga County Historian. She received her dual Bachelor’s Degrees in Anthropology and American Studies from Skidmore College before going on to earn her Master’s Degree in Public History from the University at Albany. Lauren worked locally in the field of Archaeology before entering her current position in 2009. Lauren can be reached at lroberts@saratogacountyny.gov.