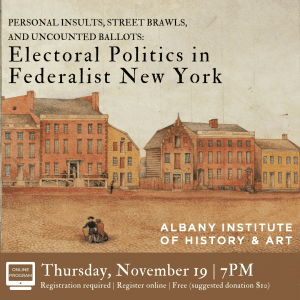 In this program, Robb K. Haberman, Associate Editor of The Selected Papers of John Jay at the Rare Book & Manuscript Library at Columbia University, will provide insights into early gubernatorial elections in New York State, which included John Jay – who played important and prominent roles during the founding of the United States – as a Federalist candidate.

Haberman will provide details about campaigning in early elections and controversies related to election results. This presentation complements the museum’s current exhibition Fellow Citizens! DeWitt Clinton’s Broadside Collection of the Early Republic, which is on view at the Albany Institute of History & Art through March 14, 2021.

The exhibit Fellow Citizens! DeWitt Clinton’s Broadsides of the Early Republic exhibition focuses on five New York State gubernatorial elections, the context of American life at the time the broadsides were written, and the life and legacy of DeWitt Clinton. It will include a selection of nearly twenty political broadsides, along with contemporary paintings, artifacts from the era, and a rare map of New York from 1796.

A broadside is a single sheet of paper printed with information on one side. Donated to the Albany Institute by Theodoric Romeyn Beck (1791-1855), the broadsides collection would be tucked away and forgotten about, rediscovered and acclaimed, and stored once more until a local political memorabilia collector learned about the Institute’s collection in 2018.

Historically, broadsides were ephemeral sources of information created to serve specific, temporary purposes. After serving their purpose they were either thrown away or repurposed and since paper was a scarce commodity in early America, their survival today is rare.

This program will begin at 7 pm, and will be held via Zoom. There is a suggested donation of $10, registration is required. All participants will receive the Zoom link one hour before the lecture to the email used during registration. Registration is available through the museum’s website or by calling (518) 463-4478.