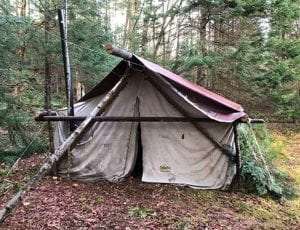 Forest Rangers Hanno and McCartney reported that on Friday, November 13, they discovered an illegal camp near a remote pond in the West Canada Lake Wilderness Area in Ohio Township, Herkimer County, in the Adirondack Park.

Upon further investigation, the Forest Rangers say they observed multiple state land violations, and decided to monitor the site for suspects.

On the evening of November 19, the Rangers apprehended two hunters from Forestport, Oneida County, occupying the camp.

The Rangers reported that the conducted an interview with the two hunters which revealed they was responsible for cutting out a trail, cutting 14 trees to build the camp, using a chainsaw in a Wilderness Area, storing personal property on state land, camping violations, and landing a float plane on a prohibited body of water in a Wilderness Area.

Photo of the illegal camp in town of Ohio provided by DEC.