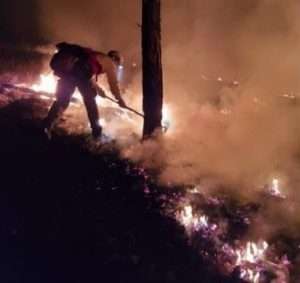 On November 3rd, DEC welcomed back the State’s fourth team of volunteer wildland firefighters from the Divisions of Forest Protection, Lands and Forests, and Fish and Wildlife that were deployed to help battle and contain wildfires raging in western states.

The crew flew to Denver, Colorado, on October 17th for deployment from the Rocky Mountain Coordination Center and were initially assigned to the Cameron Peak fire for nighttime operations, patrol, and structure defense. Their second assignment was at the East Troublesome fire for daytime operations. The crew was reassigned to Cameron Peak due to sub-freezing temperatures and heavy snow.

Photos, from above: Commissioner Seggos (right) welcomes back the latest firefighting crew upon their return; and Wildland firefighting techniques used in Colorado over the last two weeks provided.