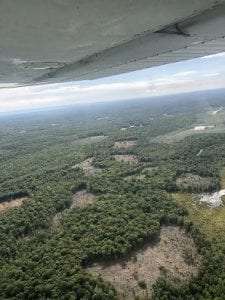 One of the many properties on which DEC employs this management strategy is Tug Hill Wildlife Management Area (WMA), a 5,110-acre property located on the Tug Hill Plateau in the town of Montague, Lewis County.

DEC acquired Tug Hill WMA in 1955, primarily to provide hunters and trappers an area with a remote forest experience. This large WMA is surrounded by thousands of acres of state forests and other conservation lands.

DEC staff wrote a habitat management plan for Tug Hill WMA, which included the creation of 455 acres of young forest habitat over a 10-year period.

DEC began cutting a patchwork of clearcuts in 2018 and concluded in 2020. The average patch size is 4.8 acres, according to the Department, and the total area of the patch cuts is 54 acres.

Species that are expected to benefit from using this forest management approach on the property include ruffed grouse, American woodcock, and snowshoe hare. When DEC staff conducted American woodcock surveys in 2015, they did not observe any woodcock. During a 2020 survey however, staff observed three woodcock using the new open areas and they have reported ruffed grouse using these areas along with snowshoe hare. Several other noteworthy species have been using the recently cut areas, including white-tail deer, black bear, coyotes, and many species of birds.

As of this fall, 114 total acres have been logged on the Wildlife Management Area using several habitat management practices, with another 331 acres to be harvested over the next six years.