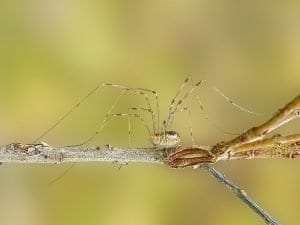 Among these hardy invertebrates, and the ones that are quite conspicuous to anyone that spends time working in the yard, garden or on the wood pile, are the harvestmen, known to most as the daddy-longlegs.

Like spiders, the harvestmen are classified as arachnids because of their body structure, having 4 sets of legs and a set of arm-like appendages near their mouth. (In the harvestmen, these arms, known as pedipalps, are barely visible, yet are still of great use to this creature in grabbing and holding items it wants to eat.) It is easy to understand how these arachnids acquired their popular name, as the lengthy thread-like legs that surround their small body are proportionately longer than those of nearly any other bug.

The second set of legs on its small, rounded body is especially long and may be seen probing the area in front of it, as well as to the sides. The ends of these legs contain sensory cells that function like antennae by providing information about the harvestman’s immediate surroundings. Should a harvestman detect something of interest with one of these structures, it may then examine that object for a brief period of time probing its surface with this set of legs. While spiders have eight simple eyes in the middle of their face, all harvestmen have only two eyes which are positioned near the top of their head. Researchers believe that the harvestman uses its sight solely to locate predators in the immediate area, and not to navigate or seek out sources of food.

The joint which attaches the legs to their body has evolved to fail when a leg is grabbed by another creature, such as a bird, shrew, or some predatory bug. Also, the severed leg is internally programmed to twitch forcefully for a few seconds afterwards. This makes an effective defense by momentarily drawing the natural enemy’s attention away from the harvestman long enough for it to quickly retreat into the surroundings and effectively fade into the background.

While tissue regeneration is common among lower forms of life, the daddy longlegs does not grow a new leg to replace one that has been lost. That’s because our short summer season makes this impractical. Also, since the harvestmen are able to get around quite well with fewer than eight legs, the growth of a new limb is not worth the expenditure of nutrients. Many harvestmen during the early autumn can be seen with only 5 or 6 legs, indicating that they have experienced several brushes with a predator.

Along with dropping a leg, the harvestmen also releases a foul smelling chemical when disturbed. This odor is undetected to a human because the amount is small, and our sense of smell is not sensitive enough to detect this minuscule amount. Some naturalists believe that harvestmen occasionally cluster when predators are active in an attempt to combine their defensive odor tactic, and cumulatively produce enough of this foul smelling substance to discourage larger creatures, like shrews, from attacking them.

Unlike spiders, harvestmen do not have a poisonous bite. This limits their prey to very small forms of animal life, such as aphids and no-see-ums. Upon capturing a small, living entity, the harvestman simple eats its victim, rather than injecting a solution of digestive enzymes into the body and later sucking out the protein enriched broth, as do spiders. Harvestmen also incorporate a fair number of other items into their diet, such as small piece of dead animal matter, fungus, and various types of plant tissue that meet their needs. Harvestmen are able to find food in a variety of settings ranging from forests to brushy fields; however, it is believed that they prefer to forage relatively close to the ground.

Early autumn is the time when much mating occurs, and clusters of harvestmen seen  at that time of year are likely individuals attempting to find a mate. After breeding, the female pushes her eggs down into the soil. Because of the cold winters in most of New York State, it’s believed that all of the adults perish before spring arrives.

Even if some harvestmen may be able to locate a sheltered spot in a crack of a foundation, or within a deep crevice of a rock outcropping, eventually these individuals succumb to the cold and desiccating effect of the dry winter air. Regardless, the eggs are well adapted for surviving such adverse conditions and inevitably enough hatch in spring to produce another generation of these familiar arachnids.

The harvestmen are delicate, harmless invertebrates that strongly prefer to live outside. Should any of these unique arachnids be encountered indoors, it is always best to carefully pick them up, and place them outdoors.