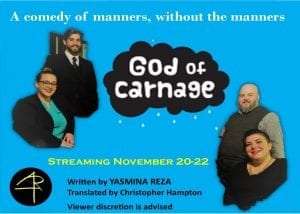 “God Of Carnage” was the winner of the 2009 Tony Award for Best Play. Set in present-day New York City, it’s the story of two married couples who meet for the first time shortly after their respective sons have a nasty schoolyard tangle. Michael and Veronica, whose son’s teeth were knocked out with a stick, invite Alan and Annette, whose son did the knocking, to their home to settle matters such as who will pay for new teeth. But any attempt at having a civilized discussion about whose child is responsible for the fight, and how the parents may have influenced such destructive behavior, quickly devolves into finger-pointing, name-calling, stomping around and throwing things.

“God Of Carnage” will be available for streaming from 12:01 am on Friday, November 20th until 11:45 pm Sunday, November 22nd. Tickets are available online. Streaming access costs $10 for a single ticket (single viewer in a single location) and $20 for a family ticket (multiple viewers in one location). The play contains mature situations and strong language. Viewer discretion is suggested.