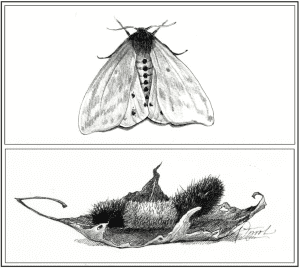 Autumn is coming to a close. The brilliant fall foliage is past peak, if not already layered in the compost bin. The last geese are honking their way toward winter homes. Predictions are proffered (sometimes cheerfully, mostly not) for how cold and snowy this year’s winter will be.

Sources for seasonal predictions vary. The Farmers’ Almanac and traditional tales are often cited. How soon those geese head south, for example, is supposed to indicate how difficult winter will be. We trust these bits of folklore because they often have a scientific basis and seem to work.

Sometimes the cuteness factor plays a role in our willingness to believe. Take the woolly bear caterpillar, whose fuzziness often tempts people to pick it up, and coincidentally, to discover that the bristles, called setae, are actually stiff and hard, not soft and cuddly. It is on the prowl in late fall, crossing lawns, logs, and roads. According to tradition, the wider the rusty-orange band around its middle, the milder the coming winter. The relative size of its two black sections is also supposed to have meteorological significance. If the front one is larger than the back one, the beginning of winter will supposedly have colder temperatures than the end of winter, and vice versa.

In fact, woolly bears are better predictors of the past spring and summer than the coming winter. Like all caterpillars, the woolly bear goes through several stages of development, called instars. Each instar is a period of steady eating and growth, culminating in the shedding of now-too-tight skin. During each molt, some of the black-bristled segments are replaced with orange ones. Fall is well under way by the fifth or sixth instar, just when we begin comparing the forecast and the caterpillar.

What this means is that the ratio of black to orange actually depends on the caterpillar’s age and developmental stage. Very young woolly bears are almost entirely dark. If spring came early, the woolly bear will have had additional time for growth, resulting in a wide orange band by fall. On the other hand, lack of rain in the spring and summer may limit its food supply (dandelions, grass, clover, nettles, and birches are preferred) and delay growth.

Looking at a stressed, spring-size caterpillar in November may tell you something about the previous months’ weather conditions, but won’t be much help with the question of whether your wood pile needs supplementing. As autumn edges closer to winter, these caterpillars seek out a place to hibernate. They may wander surprisingly far in their quest. Choice spots are under leaf litter, in a wood pile, even behind loose bark. Here they are out of the elements, but by no means protected from freezing. In fact, they must freeze in order to survive the winter.

Like frogs, woolly bears make a substance that acts like antifreeze. As the late autumn temperature drops, the caterpillar gradually fills with glycerol. This viscous substance basically prevents organs and sensitive tissues from getting freezer burn. The setae also contribute to the winterizing process by drawing water out of the caterpillar’s body. Deadly ice crystals form harmlessly on the bristles instead of inside the body, where cells critical to life reside. Eventually, only the interior of each cell remains unfrozen, safely surrounded by cold-tolerant glycerol.

With ice on the outside and glycerol on the inside, the caterpillar is ready to endure a long period of cold weather. This period of arctic diapause is so critical that a mild winter can spell doom for woolly bears. (So, too, can soft-hearted but misinformed “protectors” who relocate one to the garage, “so the poor caterpillar won’t freeze to death.”) Sheltered from snow and wind by its leaf or log shelter, the frozen caterpillar can withstand temperatures well below zero.

Looking like a crispy tortellini, it lies as though lifeless until spring temperatures warm it up. Once it thaws, it resumes ravenous eating as though never interrupted. After a few days of gorging on tender greens, the banded larva finds a site to spin a cocoon with its bristles and silk. Woodpiles are again favorite spots, but any secure surface will do. Every year I find four or five inside an empty wren house.

A miraculous transformation takes place inside the cocoon over the next one to two weeks. Then one day a delicate yellow-orange Isabella tiger moth (Pyrrharctia isabella) emerges without warning. You’re not likely to see it unless you have a porch light, however, as it is both nocturnal and short-lived. It will mate, lay eggs, and die in a matter of weeks, leaving its offspring to carry on the role of pretend prognosticators.

Barbara Mackay is a teacher and naturalist who lives in northern Vermont. The illustration for this column was drawn by Adelaide Tyrol. The Outside Story is assigned and edited by Northern Woodlands magazine and sponsored by the Wellborn Ecology Fund of New Hampshire Charitable Foundation.