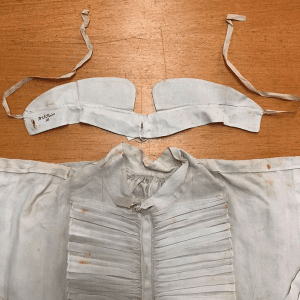 Throughout most of the 19th century, the attire of most men included a white shirt with starched collar and a knotted tie or cravat. Styles changed, but the need for a good white shirt did not.


When Hannah looked at her husband’s shirts, she though that only the collars got really dirty on a daily basis. So, she snipped off one of his collars, washed it, and tacked it back onto his shirt. This was the first detachable collar, crafted in 1827 at 139 3rd Street in Troy, NY.

Amazingly, the news of this innovation rushed through the homes of Rensselaer County like wildfire. Everyone wanted to buy separate collars. A Troy shop owner, former minister Ebenezer Brown, decided to fill his customer’s demands. He put his wife and daughter to work, cutting and sewing what he called “string collars,” which had to be taped and tied around the neck. The business grew, and they set up a bigger shop and hired more women to sew. Brown went door to door selling the collars – 25 cents each, a dozen for $2.00.

Orlando Montague wanted to get in on the action, since the collars were his wife’s idea, and opened his own factory in Troy in 1834 with partner Austin Granger. The Montague and Granger collar factory opened at 222 River Street. In addition to the original style, the duo created several variations, including the “Bishop collar,” an upright version of a standard collar, and they also made dickies and cuffs. One wonders if Hannah had any part in the business she invented.

This was the start of Troy’s century as the “Collar City.” It seemed that everyone with a work table, scissors, and irons were cutting, sewing and distributing collars. The companies ranged from small workrooms to large factories with hundreds of workers, almost all women. As the years went by, Troy’s factories, big and small, not only made collars for men, but also for women’s fashions as well. Some also made starched detachable cuffs and dickies that eliminated the need for a clean shirt too.

This was big business. But these collars, cuffs and dickies were not disposable. They could be laundered, starched, pressed and reused dozens of times.

All these white accessories could be sent in to be washed and reused, so Troy’s entrepreneurs began opening large commercial laundries to cater to those needs. Much as a hospital or restaurant might send their laundry out to be professionally cleaned and pressed, so too did the companies that made the collars.

Laundry was women’s work. It was also incredibly hard and dangerous work. In the 1850s, Irish immigrants made up almost all of the women who worked in Capital Region laundries. They plunged their hands in near boiling water, harsh bluing and bleach, starches and other toxic cleaners without gloves. (Rubber gloves weren’t invented until the end of the century.)

They did back breaking work hauling vats of wet collars and shirts from place to place, their workplaces were dimly lit, it was hot and humid, and there were few breaks or any kind of respite during the day. If you didn’t work, you didn’t get paid. Not that you got paid very much, anyway, but most of these women were working to put bread on the table.

As dangerous and toxic as the chemicals were, the job of ironing the collars and shirts was even worse. The cast iron instruments used were heavy on their own, and then were filled with hot coals. Workers got burned by the irons, and scalded by the steam. They were expected to work fast and accurately, and any collars they burned or destroyed came out of their pay. They worked 12 to 14 hours a day for about $4 a week.

Around the time the Civil War was ending, someone invented a machine that could apply starch to a collar much faster than a worker could. As the machine spit the collars out, the pressers were expected to keep up with it or be fired. More and more hands, arms and faces were burned and scalded, and more pressers quit or were fired, only to be replaced by women desperate to make money. 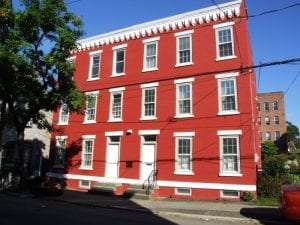 In 1864, Kate Mullany, the eldest daughter of Irish immigrants who moved to Troy in 1853, became the sole breadwinner of her family. Her father had died, and her mother was too sickly to work. She got a job at one of the large laundries, mostly because they paid the highest wages. She was soon toiling in those intolerable conditions.

Inspired by a union for male ironworkers, she determined to organize the women laundry workers into the first all-female labor union in the nation. On February 4, 1864, the Collar Laundry Worker’s Union staged their first strike, hoping to force the owners into paying better wages and changing conditions on the work floor, including slowing down the starching machine. The owner’s balked but the women stayed out, and management folded.

There’s much more to the story, of course, but Kate Mullany is important to the history of women’s rights and the labor movement. Her family home at 350 8th Street in Troy still stands.

Photos: Above, a Bishop collar; and below Kate Mullany’s home at 350 8th Street, Troy.