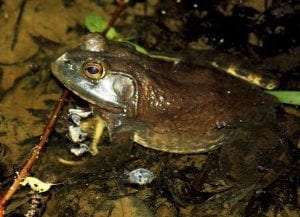 I have all the respect in the world for science, and those who practice its various disciplines, but scientists are not exempt from getting drawn into petty battles over whose ideas should prevail. I’m told there was a long-simmering dispute, apparently resolved for the moment, over how to define hibernation. The consensus now is that any critter able to actively slow its metabolism is a hibernator. Actively slowing down sounds like an oxymoron, but let’s not resort to name-calling.

This definition, however, leaves frogs out in the cold, since they don’t deliberately lower their body temperature. Even though frogs and other cold-blooded animals, a.k.a. ectotherms, remain in suspended animation all winter, they don’t qualify for the hibernator club. To describe ectotherm hibernation, biologists coined the word brumation, presumably because the world’s Strategic Jargon Reserve was running dangerously low at the time.

While frogs don’t all brumate the same way, at least they don’t argue about it. In our region we have four species of native frogs which freeze solid. The wood frog is one of the first to thaw out in springtime. Wood frogs make a barking (or quacking) call during their energetic mass orgies in ephemeral pools in the forest. The grey tree frog is actually green when young. It only turns grey in maturity, a transition to which I can relate. Its call is a “stuttering trill,” according to the literature, but my son thinks they sound like monkeys (he didn’t specify which kind).

Spring peepers are a welcome sign, or song, that spring is truly on its way. Sometimes a few will call during a warm spell in November or December, too. Chorus frogs have a melodious song, but they’re a modest bunch, and their understated calls are easy to miss when peepers are calling at the same time. To me the chorus frog song is kind of like running your fingernail along a hard plastic comb, but less irritating.

Although they seek minimal shelter, such as under leaves or behind loose tree bark, the whole pack of them turn to frog-sickles come winter. Obviously they have some kind of super-powers, because turning to ice normally bursts an organism’s cell walls, an event which is considered bad for one’s health. Fatal, to be exact. This cadre of amphibians, though, is able to pump a portion of their cellular water outside of their cell walls. It’s enough volume so that when the water in their cells turns to ice, it has room to expand without rupturing the cell walls.

These frogs also produce a range of antifreeze compounds to help prevent tissue damage in below-freezing conditions. It turns out that among other chemicals, they create ethylene glycol, the same thing that’s in your car radiator. If more than a litre of this compound is released into the environment, it’s considered a hazardous spill which must be disclosed to authorities. I don’t know how many winterized frogs it would take to constitute a litre of ethylene glycol, but it’s doubtful they’d report it anyway.

Another group apparently decided the frozen-amphibians section was not for them, but that holding their breath all winter was a piece of cake. Bullfrogs, the big beefy guys (both sexes brumate, of course, but like with our species, only the male frogs are loud, puffed-up attention-seekers) with the iconic “jug-o-rum” call, and three bullfrog cousins all do this. Green frogs, whose name doesn’t really set them apart much, have a distinctive, if atonal, “loose banjo string” twang, while pickerel frogs make a guttural, drawn-out series of croaks. It’s creepy enough to scare kids, but the pickerel females like it. Mink frogs may have been last in line when songs were handed out, as the males’ call is like the tapping of a hammer on wood.

All members of this clique hibernate – I mean brumate – underwater. One might assume they would want to nestle into mud, as it might be warmer there, but that wouldn’t end well. Like all amphibians, frogs absorb oxygen through their skin. There may not be much oxygen in water (a maximum of 14.6 parts per million in water vs. 210,000 ppm in the air), but there is none in sediments at the bottom of a pond. Microbial life dining on organic matter down there use up any available O2 . Given that their brumating metabolism is a tiny fraction of when they’re active, these frogs use very little oxygen.

Toads, on the other hand, are only fond of water sports in the tadpole stage – after that they lose the ability (or maybe forget how) to swim. Underwater is not an option, and they lack the machinery to pump water out of their cells, and to make antifreeze. But they are built for digging. Using hardened knobs on their hind feet, toads can burrow 40-50 centimetres (15-20 inches) down to get below the frost line. They hide the entrance, but do not seal it, as they need a supply of air.

In southern Canada and northeastern US, it’s the American toad one sees in the garden. Their long, melodious trill on warm summer nights are among my favourite animal sounds ever. If you’re not a fan of their music, consider that on average, a single adult toad eats 10,000 insects each season. Many garden stores sell “toad abodes,” terra-cotta or plastic toad habitats for the back yard. I have never tried one, but am told they really do attract toads. Homemade toad cottages can be made from old flower pots and many other materials around the house. More information can be found here.

If you’re tempted to think it’s a hard winter in a few months, be thankful you don’t have to brumate.