Last October, a young student in one of my nature journaling workshops pointed out a fuzzy yellow caterpillar with long black tufts.

“Those kind sting!” he declared. He was the third student that month to point out the same kind of caterpillar as stinging. I remembered being warned away from hairy caterpillars as a kid, but I’ve since picked up many – of various types – with no ill effect. I wondered, could the hairy-caterpillars-sting story be a myth?

To learn more, I contacted Rachel Maccini, Urban Entomologist for the University of New Hampshire Cooperative Extension. She explained that many fuzzy-looking caterpillars, especially in the tussock moth subfamily (Lymantriidae), have “urticating hairs” that they use for self-defense. At the tip of each defensive hair is a microscopic barb with a weakened ring at the base, allowing the barb to easily break off in the skin of any animal that grabs onto the caterpillar. These barbs are physically irritating, often causing an itchy-burning sensation, similar to what happens if you touch fiberglass insulation.

Some caterpillars take their urticating hairs a step further by connecting them to poison sacs. When the barb breaks off, it also delivers a venom, like the stings of other insects. Seen with a microscope, urticating hair barbs look like miniature hypodermic needles. No wonder picking up a hairy caterpillar can be an uncomfortable experience!

When someone picks up a caterpillar with urticating hairs, the degree of unpleasantness depends on the number of barbs that stick in their skin and their susceptibility to any venom that may be present. Most reactions range from itchy skin to blisters and swelling. Kids are often more sensitive to urticating hairs, so it makes sense to warn young nature lovers to be cautious with fuzzy caterpillars, even if they do look like tiny, crawling teddy bears. 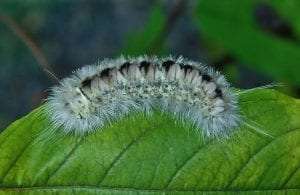 Some caterpillars with urticating hairs advertise that their defense system is up and armed with high contrast warning colors and complicated “hairdos” that include short or long tufts in different colors on different parts of their bodies.

On the other hand, Maccini pointed out that the streaked tussock moth caterpillar (Dasychira obliquata) has urticating hairs and is a mundane brown with only a couple of long dark tufts. Other hairy caterpillars, like those of the tiger moth subfamily (Arctiidae), which includes the familiar woolly bear (Pyrrharctia Isabella), have no urticating hairs at all.

Moths may use urticating hairs as defense beyond the larval state, Maccini said. Some species, including the definite marked tussock moth caterpillar, will weave their shed urticating hairs into a cocoon around themselves as they pupate. The adult moths of two species considered invasive to the Northeast, the brown-tailed moth (Euproctis chrysorrhoea) and the gypsy moth (Lymantria dispar), have urticating hairs on their bodies. Female brown-tailed moths will even cover their eggs with these hairs from their bodies.

I didn’t keep any of last year’s yellow-and-black fuzzy caterpillars for identification, but I suspect they were American dagger moth caterpillars (Acronicta americana). People have reported experiencing skin irritation after handling this species, although there is no sign that it possesses a venom. I wonder now if I’ve been able to safely handle these and other tufted caterpillars because I don’t scoop them up, but instead coax them to crawl onto a finger, exposing less of my skin to the barbed tips of their urticating hairs.

While getting an itchy rash from a caterpillar is unpleasant, Maccini emphasized that there’s no need to fear fuzzy caterpillars. Caterpillars with urticating hairs, whether they have a venom or not, are simply trying to make themselves an unpleasant mouthful for potential predators. Many of these caterpillars boast interesting colors and shapes and can be watched without touching, or carefully moved and closely observed while wearing gloves.

Rachel Mirus lives and writes in Duxbury, Vermont. The illustration for this column is by Adelaide Murphy Tyrol. The Outside Story is assigned and edited by Northern Woodlands magazine and sponsored by the Wellborn Ecology Fund of the New Hampshire Charitable Foundation. Photo of Hickory Tussock Moth courtesy Wikimedia user The Cosmonaut.